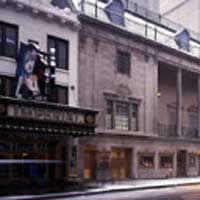 Average Rating based on 3 reviews

"...In "Walking With Ghosts," Gabriel Byrne stands on the stage telling stories about his life, from his childhood in Dublin through to the early stages of his career as an actor, most of the stories excerpted from his literate memoir of the same title, published last year (Grove Press, 197 pages.) But those quirky curtain calls are among the moments that are unique to the play - and a good example of the pleasures Byrne provides on the stage that are distinct from those on the page. Under the direction of Lonny Price, Byrne's stories from his life, which are punctuated by brief blackouts, turn from vignettes into scenes."

"..."Walking with Ghosts," directed by Lonny Price, has some quirks. It's only loosely staged with minimal visual accoutrements and it hews too closely to the memoir. The piece, which could use more narrative drive for a two-act night of theater, unfolds, chapter-like, on the stage. Some of the transitions are abrupt. And the mix of theme and chronology sometimes feels better suited to the page than the stage."

"...It's a testament to the second act of Walking with Ghosts, Gabriel Byrne's new one-man show at the Music Box Theatre, that its bouncy levity and charismatic performance managed to erase the rabid hatred I'd developed during its first. The notes I wrote during that opening half could be hardly be shown on a men's room stall in the actor's native Dublin, so enraged was I at being made to sit through a series of monologue even James Tyrone (from Byrne's last Broadway outing in 2016's Long Day's Journey Into Night) would deem self-serious and overblown."