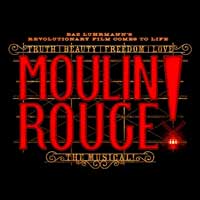 "...This one's for the hedonists. All you party people should know that the Al Hirschfeld Theater has been refurbished as an opulent pleasure palace, wherein decadence comes without hangovers. That's where the euphoric "Moulin Rouge! The Musical" opened on Thursday night in a shower of fireworks, confetti and glittering fragments of what feels like every pop hit ever written. Inspired by the 2001 Baz Luhrmann film and directed with wicked savvy by Alex Timbers, this "Moulin Rouge" is a cloud-surfing, natural high of a production. It has side effects, for sure, including the vertigo that comes from having your remembrance of songs past tickled silly and the temporary blockage of any allergies to jukebox musicals."

"...Moulin Rouge! The Musical is definitely all about the emphatic exclamation point, rarely about the subtler moments, and it could just as easily play Vegas as Broadway. It's a postmodern La Boheme on hallucinogens. But watching performers of this caliber bathed in the caressing colors of Justin Townsend's lighting, cocooned in the imaginative confectionary of McLane and Zuber's designs, and navigating Levine's elaborate musical mazes is an experience that will leave few indifferent. To borrow the title of a buoyant song that drives the mega-mix curtain call (possibly because the rights had been acquired and there was nowhere else to put it): "Hey Ya!""

"...As in the film, the plot is yet another tragic story of mismatched lovers, inspired by everything from "Carmen" to "La Dame aux Camelias." But I'm not sick of it, and nor should you be. Tales about true love transcending divergent social origins and personal destinies never go out of fashion."

"...Rather than glide effortlessly, "Moulin Rouge!", using a leaden new book by playwright John Logan, remains fixed in a kind of stop-and-start mode. The show's momentum is halted by flat, long-winded scenes of dialogue, often with minor characters debating bohemian ideals. The bump-and-grind dance choreography (by Sonya Tayeh) is surprisingly garish and tacky."

"...John Logan's book adds no big (or small) surprises and little emotion - what genuine feeling graces Moulin Rouge comes via the likes of Elton John and Bernie Taupin, when a "Your Song" pushes the exact button intended. Both Tveit and Olivo are wonderful singers and fine actors, but neither can bring much depth to these stock stage musical characters. (And if you're thinking that's an absurd request, get yourself to Hadestown, Oklahoma! or Tootsie.)"