The Book Of Mormon Reviews 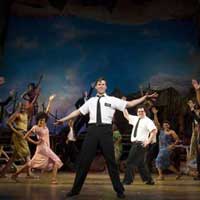 The Book Of Mormon

Average Rating based on 22 reviews

"...This is to all the doubters and deniers out there, the ones who say that heaven on Broadway does not exist, that it's only some myth our ancestors dreamed up. I am here to report that a newborn, old-fashioned, pleasure-giving musical has arrived at the Eugene O'Neill Theater, the kind our grandparents told us left them walking on air if not on water. So hie thee hence, nonbelievers (and believers too), to "The Book of Mormon," and feast upon its sweetness."

"...It's a show where you catch yourself laughing one minute, mouth agape the next, eventually wiping away tears, and, finally, cheering. Stone and Parker are famous for their take-no-prisoners, nothing-is-sacred approach to humor. And Lopez knows about thumbing his nose at contemporary conventions. They all share credit for the book, music and lyrics. Silly, soulful and (no surprise with these guys) seriously rude, the score is consistently chipper and clever and keeps the pages in this "Book" turning smoothly."

"..."The Book of Mormon," which opened Thursday at the Eugene O'Neill Theatre, is inventive and slick and subversive. It is funnier and smarter than "Monty Python's Spamalot," managing to offend, provoke laughter, trigger eye-rolling, satirize conventions and warm hearts, all at the same time."

"...The entire cast is terrific, and Gad and Rannells make a dynamite pair, exchanging leader and follower roles with equal conviction. Gad (a correspondent on The Daily Show With Jon Stewart) may be giving the single funniest, most endearing performance on Broadway. But Rannells is not far behind, his character's righteousness at war with his inflated ego."

"...It is meticulously cast and everyone shines. Nikki M. James as sweetly naive Nabalungi has a gorgeous voice. Andrew Rannells plays golden boy Elder Price with divine versatility; and as misfit Elder Cunningham, Josh Gad is truly blessed with outsize talent. Casey Nicholaw shares directing credit with Trey Parker. Along with Stone and Lopez, their "Book of Mormon" is an inspired collaboration made in theatre heaven."

"...Like several shows this season, "Book of Mormon" is too long and comes close to wearing out its welcome before redeeming itself with a strong second act. And like most 12-year-old-boys, it isn't nearly as nasty as it would have us believe. Not that there's anything wrong with that."

"...Given the key contributors that "South Park" creators Trey Parker and Matt Stone teamed with for their first Broadway outing, one might expect "The Book of Mormon" to show the influences of "Spamalot" and "Avenue Q." As it happens, this raucously funny new show surpasses both of those Tony winners, and handily so: Every song enhances the hilarity, expert staging heightens every gag, and the cast of fresh faces is blissfully good. Broadway hasn't seen anything like it since Mel Brooks came to town with "The Producers," only "Mormon" has better songs."

"...This buoyancy is enhanced by a game young cast, under Parker and Casey Nicholaw's sprightly direction. Andrew Rannells is picture-perfect as the square, hyper-ambitious Elder Price, whose frustrated wish to transfer to Disney/boy-band capitol Orlando is a running joke. As Cunningham, Price's portly, socially inept partner and foil, Josh Gad overdoes the sloppy-sidekick shtick a bit, but not so much that he doesn't make us laugh and, eventually, cheer his progress. In fact, regardless of your spiritual inclinations - or lack thereof - you're likely to leave The Book of Mormon a little happier for the experience. Seriously."

"...Told the creators of "South Park" were making a Broadway musical, you'd naturally expect a broad, foul-mouthed, juvenile, scatological, irreverent satire. Sure enough, "The Book of Mormon," which opened last night, is all that - and much, much more. It's a fiendishly well-crafted, hilariously smart - or maybe smartly hilarious - song-and-dance extravaganza. The show's a hoot. The show's a hit."

"...Every detail of the production - choreographed with typical brilliance by Spamelot's Casey Nicholaw and codirected by Nicholaw and Parker - serves a purpose. Every character signifies. Every song is crafted with erudition about what a song is meant to do. The cast is uniformly nimble and charismatic, including Michael Potts as a Ugandan village leader and Nikki M. James as his daughter, a lovely young woman desperate enough to escape her own impending genital mutilation that she listens to the new Mormon visitors with an open mind. Costumes, set, lighting, dancing that will look great at the Tonys when the cast comes to collect what I predict will be an armload of awards: This is what 21st-century Broadway can be. If Broadway has the balls."

"...'The Book of Mormon," the jubilant and expert one-joke Broadway musical by Trey Parker and Matt Stone, is everything you should expect from a show by the heat-seeking rascals of "South Park." What you may not expect, however, is the sweetness."

"...As you'd probably expect, the show's potty-mouth creators do not refrain from using explicit language. But in spite of the curse words, "The Book of Mormon" is an upbeat, even sentimental musical that combines Rodgers & Hammerstein, "Les Miz"-style powerhouse ballads and tap dancing."

"...Trey Parker and Matt Stone, the naughty boys of "South Park," have teamed up with Robert Lopez, one of the co-creators of "Avenue Q," and the results of their collaboration are pretty much what you'd expect: slick and smutty. "The Book of Mormon" is the first musical to open on Broadway since "La Cage aux Folles" that has the smell of a send-in-the-tourists hit. Casey Nicholaw ("The Drowsy Chaperone") has staged the musical numbers with cheery energy, and the cast, especially Nikki M. James, is terrific. But don't let anybody try to tell you that "The Book of Mormon" is suitable for anyone other than 12-year-old boys who have yet to graduate from fart jokes to "Glee." A couple of reasonably effective production numbers notwithstanding, it's flabby, amateurish and very, very safe."

"..."The Book of Mormon" expresses a giddy contempt for that innocence, in one of the most joyously acidic bundles Broadway has unwrapped in years. (Applause, too, for set designer Scott Pask's gloomy rendering of an African village.) The sin it takes such fond aim at - blind faith - is one that this musical suggests observes no religious bounds."

"...But just as it starts to feel as if watching the "South Park" guys deconstruct the apparent illogicalities of Mormonism is starting to sound the same, one-sided note, Parker, Stone and Lopez engineer a very savvy twist in the narrative. This re-energizes the show early in the second act, focuses it more acutely on those "Avenue Q"-like themes of young people seeking out their purpose and propels it to a conclusion that leaves audience members feeling they've attended something weightier than a series of pointed laughs fired into a soft religious target."

"...Such a magpie aesthetic makes perfect sense for a show that examines, with impressive insight, cultural transmission, adaptation and assimilation. "It was a bunch of stuff you made up," Price says to comfort Cunningham, who fabricates a wildly blasphemous version of Mormonism for the natives. "But it pointed to something bigger." Just so, The Book of Mormon is more than a collection of offensive jokes about female genital mutilation, bestiality and Mormon kitsch; it's about our ineradicable hunger for narrative and mystery-no matter how weird, sick or damnably fake."

"...The Book of Mormon, arriving after months of hype, somehow delivers even more than its ridiculously felicitous advance buzz promised: It's an often uproarious, spiritually up-tempo satire not just of Mormonism, and not just religion in general, but of (no kidding) Occidental civilization itself, in all its well-intentioned, self-mythologizing, autoerotically entitled glory."

"...The show--done by the South Park guys with the help of an Avenue Q writer--manages the high-wire feat of spoofing religion, poverty, and Jesus, while throwing in AIDS jokes and songs about closeted Mormons "turning it off"--and virtually everyone leaves happy!"

"...The sharp-edged book and fun score by Parker, Stone, and Lopez offer a screamingly funny yet sharply insightful full-length take on religion in general and Mormonism in particular. There are also pointed but loving tributes to musical comedy conventions, shockingly vulgar humor, and that rarity on Broadway these days: topical and effective satire."

"...But for all its irreverence - and there's enough off-color insouciance to offend church ladies of every denomination - "The Book of Mormon" has the old-fashioned musical comedy heart of adults who spent much of their adolescence lip-syncing to original cast albums in their finished basements."

"...The wonderful zest that everybody packs into their performances suggests that they love doing this brilliant show, and who can blame them? Let's pray that the Messrs. Parker and Stone are dreaming up yet another original musical to brighten up dear old Broadway."

"'The Book of Mormon' is somehow both jaw-droppingly ill-mannered and adorably innocent, not to mention one of the best new musicals in recent memory...While 'The Book of Mormon' is foul-mouthed, offensive, blasphemous, and incredibly rude, it is also one of the sweetest, most innocently hopeful musicals I have seen in a long time. And the fact that it manages to be both is a key factor in its success."