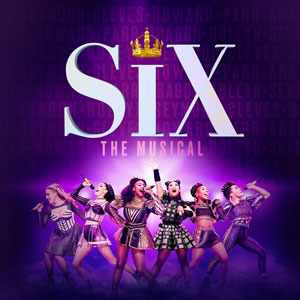 "...Yet somehow "Six," by Toby Marlow and Lucy Moss, isn't a philosophically incoherent jumble; it's a rollicking, reverberant blast from the past. I don't just mean that it's loud, though it is; you may clutch your ears even before the audience, primed by streaming audio and TikTok, starts singing along to the nine inexhaustibly catchy songs. I also mean that though gleefully anachronistic, mixing 16th-century marital politics with 21st-century selfies and shade, it suggests a surprising, disturbing and ultimately hopeful commonality. Which shouldn't work, but does."

"...Each woman has a signature color and a signature strength: Macasaet delivers tart commentary (her Boleyn is bitter and she's not getting over it); Mack's swaggering Anna has stadium-size charisma; Mueller slows the rock juggernaut with Jane Seymour's sweet Adele-ish ballad ("Heart of Stone"); Pauly seduces us and then warns us with her practiced side-eye. Vocally, the first and last wives bracket the show with two astonishments."

"...Historians might take issue at this decision to shift spotlight away from the crown, and others might dismiss the concert format of the musical as easy entertainment pickings. Still, there's much to admire and love. It may not be Masterpiece Theater, but this "Six" is a solid "10" for joy."

"...Who doesn't enjoy a royal wedding? The zingy Broadway musical Six celebrates, in boisterous fashion, the union of English dynastic history and modern pop music. On a mock concert stage, backed by an all-female band, the six wives of the 16th-century monarch Henry VIII air their grievances in song, and most of them have plenty to complain about: two were beheaded, two were divorced, one died soon after childbirth. In this self-described "histo-remix," members of the long-suffering sextet spin their pain into bops; the queens sing their heads off and the audience loses its mind."

"...Ah well, so be it. For those looking for pure diversion, with bits of sung history tossed in, "Six" will be an unalloyed pleasure. It will, I confidently expect and indeed hope, be a long-running hit, playing to audiences on Broadway and elsewhere for longer than most of that wretched king's marriages lasted."