Into the Woods Reviews 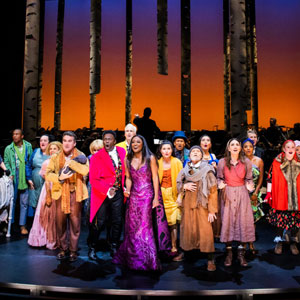 Average Rating based on 18 reviews

"...After the woods and the wolf and the dark and the knife, Little Red Riding Hood has learned a thing or two. In the first act of "Into the Woods," while modeling a cloak made from the wolf's pelt, she shares her wisdom. Be prepared, she advises in "I Know Things Now." Watch out for strangers. Stephen Sondheim's bone-dry lyrics supply one more maxim: "Nice," Little Red concludes, "is different than good.""

"...David Rockwell's simple but effective design initially consists of dollhouse versions of the homes of Cinderella, the Baker and Jack, suspended above their respective identifying props - a bucket, a pastry cart and a milking stool. But even those minimal elements disappear to be replaced by birch trunks and a shifting moon at the back of music director Rob Berman's 14-piece orchestra, seated onstage behind the playing space. Hearing Jonathan Tunick's shimmering orchestrations played - and sung - so exquisitely serves as a wonderful tribute to Sondheim, whose death last November left Broadway with an inconsolable sense of loss echoed in the somber moments of this show."

"...Let me just say it plainly: There's no weak link in the cast, all night. Bareilles has a light tinkly playfulness in the funny moments-I'm thinking of that line that Joanna Gleason reportedly gave Sondheim, "This is ridiculous, what I am I doing here, I'm in the wrong story"-that almost suggests that she's taking it easy up there, and then her big mezzo-soprano voice comes around the corner and knocks you back in your chair. Miller as the Witch occasionally seems a little distanced from the rest of the cast-her "Stay With Me" feels discrete, a showy solo concert turn rather than a part fully blended into the whole. But it's a good concert turn."

"...The revival that opened on Broadway Sunday night is not just a glorious lifeline for fans reawakening to the wonders of live performance after a long, dark hiatus. It's a crystalline showcase for sensational performances from an all-star cast of marquee veterans, and a testament to the enduring genius of the beloved musical, now in its fourth Broadway incarnation since premiering in 1987. The biggest giant in the sky this time around is Sondheim himself, and exalting his legacy is the production's unmistakable guiding principle."

"...Whether it's John Doyle's "Sweeney Todd" performed by actor-musicians on a bare stage in 2005 or last season's excellent gender-swapped "Company" helmed by Marianne Elliott, Sondheim shows have gotta get a gimmick. The most recent Central Park revival of "Into The Woods" 10 years ago changed the old man narrator character to a little boy lost on a camping trip. Sure!"

"...If I had the time and money, I could happily sit through every single performance of the exceptionally cast, musically perfect, joyous and glorious Broadway revival of "Into the Woods," Stephen Sondheim and James Lapine's 1987 musical of fairy tale mashups, moral probing, and community responsibility, which is playing a limited run through the end of the summer at the St. James Theatre."

"...At various point in this show, the woods represent adventure, abandonment, ungrateful children, sexual betrayal, worry, pain and, of course, death. It is pliable to any moment, so surely some will have the losses of COVID-19 come to mind as the destructive giant stomps around, or the divisive political turmoil of the recent months or perhaps a perceived threat to democracy or personal freedoms."

"...Part of the magic of fairy tales is how they gain in repetition: Often though we've heard them, we still can thrill to each new telling, each variation on their familiar themes. So it is with Stephen Sondheim and James Lapine's dazzlingly fractured 1987 musical Into the Woods, which combines the stories of Cinderella, Jack and the Beanstalk, Little Red Riding Hood and more into a witty tragicomic farce that-instead of some tidy moral-ends with a complex look at morality itself. In the past decade alone, New York audiences have been treated to revivals of Into the Woods in Central Park and Off Broadway as well as a live-action Disney film adaptation. Now, after a smash spring engagement at City Center's Encores! series, the show returns for a limited Broadway run in a focused, funny and thoroughly satisfying staging by director Lear deBessonet."

"...To say it delivers on its promise is an understatement. A cast as fine as any on Broadway this year - Sara Bareilles, Brian D'Arcy James, Patina Miller, Phillipa Soo, Gavin Creel, Joshua Henry (and that's just for starters) - musical direction and orchestrations that bathe some of Sondheim's most breathtaking pieces of music in arrangements and execution that can't be improved upon, a warm, lovely lighting design that envelops the stage and soothes the audience as if leading us down a wooded path where things might not always be so nice, well, this Into The Woods has us at its every beck and call. Resistance is futile."

"...Into the Woods is often accused of precious moralizing (I can just hear readers calling hypocrisy on the shots fired at "twee aphorisms"). But a clear-eyed production like the one now onstage at the St. James perfectly encapsulates how it should be just the opposite. As Bareilles belts out a celebratory "Now I understand!" at the end of "Moments in the Woods," we sit back and wonder if she really does, or what further revelations a third act might have brought her. As James mournfully sings "All the children...All the giants..." at the end of "No More" (a master class in restraint), we're left with the task of deciphering that heartbreaking lyrical inkblot for ourselves. It is a buffet of questions, not answers. And if that sounds like your kind of feast, you will leave nourished and sated, with a doggie bag full of ands. Or is it ors?"

"...Direct from a deservedly much-ballyhooed run in May at New York City Center Encores!, this star-packed and polished Into the Woods is currently slated to run for eight weeks. It's Broadway's giant summer blockbuster. What a stellar way to launch the 2022-23 Broadway season."

"...With each performers entrance on stage, the audience was on the verge of hysteria. Sometimes the audience was so revved up that it felt as if I was attending a rock concert. Each song was greeted by wild applause, even for the unknown understudies. Their reactions were a bit much, but who could blame them? The show is a delight."

"...Into the Woods, youll recall, is a grown-up look at the conventionally happily-ever-after world of familiar Charles Perrault and Grimm Brothers fairy tales. Ironically, Between the Lines, a new musical playing a block away also offers a postmodernist take on fairy tales; in one scene, a therapist says to a teenage girl obsessed with a fictional prince, Fairytales dont usually inspire violence, to which she replies, Tell that to the Brothers Grimm."

"...Well, it would be a bit awkward if the New York City Center Encores! production of Stephen Sondheim's Into the Woods, opening on Broadway tonight (St. James Theatre, to August 21), was not as wonderful as the original production of only two months ago. Fortunately, with a few cast changes, this remains a shimmeringly gorgeous production, directed with such care and flair by Lear deBessonet-and the best tribute imaginable to the master himself, who died aged 91 last November."

"...Let's turn instead to the enthralling and glorious revival of Stephen Sondheim and James Lapine's Into the Woods, a bewitching elixir of musical lushness and sophisticated wit that has lost none of its beauty or charm in the 35 years since it opened on Broadway. Children will listen, Sondheim tells us (yes, they have to be carefully taught). And yet, forget the tots; it's adults who should lean in and learn to reconsider wishes. Into the Woods is a blissful contradiction: musical fantasy that puts us back in touch with reality."

"...This "Into the Woods" is lifted from the 2022 New York City Center Encores! production. Even the Encores! orchestra reprises its role under the baton of Rob Berman. Instrumentalists usher Sondheim's music to life from upstage, cloaked in black like a shadow of the actors before them. However, those expecting the other half of the stage to materialize lush forests or glimmering castles will be disappointed. In true Encores! fashion, the show takes place on a largely bare-bones set that's adorned only slightly with three miniature suspended buildings and foliage-less trees. Often the actors are cramped downstage, stunted by linear movements in and out of each other's storyline. The upside, of course, is we are that much closer to the best cast on Broadway."

"...It is fitting, if still a shame, that this revival of Into the Woods has foregone the tradition of a giant-sized boot adorning the facade of its theater. Lear DeBessonet's pared-down staging of Stephen Sondheim and James Lapine's enduring classic, which transfers to the St James Theatre following a sold-out summer Encores! run, draws out the show's heart by stripping it down, most insistently, to its basics. No big set; no fancy effects here. You will just have to imagine that boot."

"...When a show is absolutely perfect, reviewing it becomes more of a challenge than if it were flawed. Its not difficult to list a productions shortcomings and how they detract from the experience, but enumerating superlatives makes your writing sound like a gushy, repetitive love letter. Well, here goes. With the possible exception of Hamilton, the new revival of Into the Woods, Stephen Sondheim and James Lapines beloved mature twist on traditional fairy tales, is as close to perfection as any production on or Off-Broadway in the past 30 years (the 1992 Guys and Dolls was the last one to come the closest)."