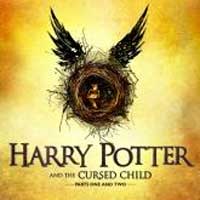 Harry Potter and the Cursed Child

Average Rating based on 4 reviews

"...The new version, which opened on Tuesday, does feel smaller - its themes starker, its concession to fandom more blatant. But as directed by Tiffany and choreographed by Steven Hoggett, with an essential score from Imogen Heap, it remains diamond-sharp in its staging and dazzling in its visual imagination, as magical as any spell or potion."

"...But the changes have the salutary effect of focusing the story on its most interesting new creations: the resentful Albus Potter (James Romney) and the unpopular Scorpius Malfoy (Brady Dalton Richards), whose bond has been reconceived in a significant way. The original play hinted that their relationship might be more than just a friendship, but cloaked it in imply-and-deny evasion; in the revised version, it's a more or less explicit romance. Aparecium! Lumos! What once was hidden has come to light, and the show shines brighter for it."

"...While perhaps a but long for the little ones at 280 minutes, ages eight and above will have no problem staying focused and enjoying the proceedings. And the deeper themes of family, loss, love and acceptance should prove thought-provoking for adults. Ultimately, it is the transformed theater and jaw-dropping, extraordinarily powerful theatrical forces - seemingly from a supernatural source - that put the wizarding cap on this must-see marvel of magic."

"...The rapport between Albus and Scorpius, who is given a wryly funny hangdog edge by Richards, is if anything enhanced in this version, since some of the diversions on the edge of their adventures have been trimmed back. Watching this friendship, between two boys bullied for different reasons - Harry due to his mediocre wizarding skills compared to his father; Scorpius because rumors continue to swirl that he is in fact the son of the arch-villain of the Potter canon, Voldemort - brings a layer of warmth to the proceedings that gives the production another emotional focus."