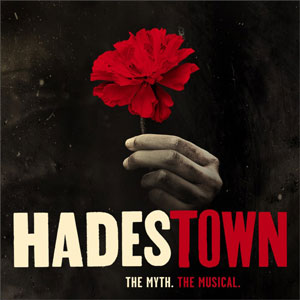 Average Rating based on 26 reviews

"A gorgeously sung, elementally spare production...The performers intermittently move through aisles in the audience, bringing an inviting intimacy to the production. It's a smart tactic, because while its score is continually beguiling, Hadestown' might feel static were it not for Ms. Chavkin's simple but inventive staging...Ms. Mitchell's lovely music and well-turned lyrics are tightly bound together, and recall traditional folk music with a distinctive Southern flavor."

"The material has been given an enthralling environmental staging...Energetically sung by the powerful-voiced ensemble, the music is terrific: endlessly inventive and eclectic, as melodic as it is funky and folksy...The lyrics aren't as scintillating as the music, and the action feels overly busy at times. The dialogue can be wince-inducing...It hardly matters, thanks to the music's relentless energy and inventiveness as delivered by the crack band and terrific ensemble."

"The likelihood of enjoyment may depend on your willingness to accept that what you are watching is not in fact a musical but more of an illustrated pop concert, if a very pretty one. On the other hand, if you go in hoping for a story told through song, the traditional province of musical theater, you will be very much disappointed...Luckily the singing is generally excellent...When almost everything is narrated, the lack of variety dulls emotion and smothers the pulse."

"Mixes sweet and sexy folk, rocking New Orleans jazz, get-down blues and sinful soul. The eight cast members who perform the 35 songs are uniformly terrific; it's hard to imagine anybody better. If the plot strays little from the bare-bones story of Orpheus, the songs and the staging are enough to enchant for the two-hour running time...'Hadestown' is not a traditional musical. Think of it as a concert with benefits, but don't resist the temptation to go."

"Proves to be smart and romantic but dramatically underwhelming...In Mitchell's hands, the sensitive Orpheus is too focused on playing the guitar to provide for Eurydice's real-world needs, so she independently ventures down to an industrialized underworld...The cast is excellent and songs are either gently touching or catchy, but Hadestown' does come off as slow, undercooked and choppy, more reminiscent of a concert than a theatrical work."

"The stellar ensemble fills the theater with soaring harmonies, weaving in and out of the audience and the onstage band. Mitchell's music, lush and strange and lyrically brilliant, has found its match in this cast...The one weak spot is Daunno, whose vocal and acting chops don't stack up against his peers. Still, Hadestown' is something special, a sensory feast that's also a passionate debate between pragmatism and romance."

"What Mitchell's music doesn't have is much dramatic drive. Song after song gives us a glimpse into the characters' emotional state. Rarely are we further along in the story when someone finishes singing...Mitchell the lyricist is no match for Mitchell the composer. Her wordplay is intelligent, but rarely is it inspired...Rachel Chavkin's direction occasionally creates magnificent stage pictures, but the individual moments don't build."

"The Orpheus myth is about so much more than young love denied. And, luckily, singer-songwriter Anaïs Mitchell and director Rachel Chavkin celebrate such depths in the delightful new folk opera 'Hadestown'...The piece infuses the familiar Greek legend with sharp-edged commentary on capitalism, exuberant songs, and a complex meditation on love....Mitchell's best songs are raucous group numbers, expanding the characters' dilemmas into playful meditations on love and hardship."

"Mitchell's version cleverly evokes the 'satanic mills' of industrialisation and the lonely romance of the railroads, but it's not quite enough to pad out the story for two hours. As directed and co-developed by Rachel Chavkin, 'Hadestown' thus feels more like a semi-staged concert (albeit an entertaining one) than a fully developed work of musical theatre. The ending in particular fails to extract much pathos from Orpheus's fatal backward glance."

"First recorded and performed as a concept album, the song cycle by Anaïs Mitchell is easy listening, sometimes sparklingDirector Rachel Chavkin working with terrific design talent and superb jazz-meets-country orchestrations by Michael Chorney, provides a Tiffany setting for Mitchell's work...I didn't weep for E&O when he blew their escape plan in the end. But maybe it's me: The lady seated behind me, emoting heartily the show, was practically speaking in tongues by the end."

"In 'Hadestown' the old tale has been brought to fascinating, lushly staged new lifeImperative for anyone who appreciates vibrant, original musicals. While 'Hadestown' hasn't completely shed its album-concert roots, it's not overstating anything when it describes itself as a folk opera...The real star of 'Hadestown' is the music with its well blended mix of folk music, blues-y jazz and pop...The lyrics are also very smart...'Hadestown' is highly original and enjoyable."

"A testament to the rewards that can be reaped from conceiving an approach and sticking to it no matter what. Lots of theatre claims to be immersive, but few accomplish it as totally as Hadestown' does. But for all its physical and technical brilliance, it's dull, even irritating, as an example of musical theatre writing...As with other recent stage efforts from pop artists, it has no discernible interest in telling its story on the theatrical terms."

"Anais Mitchell's remarkably diverting musical...This highly original piece has been directed with great flair by the talented Rachel ChavkinChavkin ensures that we are immersed fully in this captivating tale, since the cast often stands and dances before us (and even interacts with a few of us)Mitchell's magnificently varied score is the main attractionMore importantly, each piece of the mostly sung-through score works beautifully in this theatrical setting."

"Chavkin has crafted a visually arresting production to match the richness of Mitchell's score...Chavkin and Mitchell enrich this ancient story in their imaginative rendering, making the characters and their relationships seem fresh and relatable...Everything about Hadestown' is designed to grab your attention and pull you into the story. Even if you are not a fan of folk music, it will be difficult to resist this tuneful and visually spectacular production."

"This interestingly told and interestingly staged journey to the Underworld, alas, only occasionally hits the heights...While we have a bunch of prettyish numbers...things don't get hot until we get the hell to Hades. The second act more thoroughly engages us and holds our attention...Fans of Mitchell's album will likely be wowed by the piece, and the stage version is a worthy attempt at trying something different. But this visit to 'Hadestown' is not quite compelling."

"Anaïs Mitchell's 'Hadestown' is a faithful retelling of this epic myth with a deep connection to the present and the plight of the 99 percent. Orpheus' journey to rescue Eurydice from Hades and death and the gripping journey of the pair to the very Gates of Hell has never been more clear or more compelling...Ms. Mitchell's scintillating 'Hadestown' quickens the deadliness of our current political maelstrom and the social ennui it so weakly attempts to address."

"For a show inspired by a tale dramatized in countless films, plays, and operas...it's disappointing to see how little drama has been squeezed from it here, despite the many appealing songs and the infusion of a capitalistic exploitation theme...With its extensive use of mics, and even a section where Persephone introduces each orchestra member for applause, it's basically a well-staged concert. Judging by the warm response, however, many will have a hot time in old Hadestown tonight."

"Put a great Greek myth together with an awesome genre-spanning score plus a superb cast and you get the downtown hit 'Hadestown'It hits with the full impact of the consequences of one fearful actionMr. Sullivan's stage presence is a study in 'less is more;' he is riveting and endearing as he moves the action along with his blues-tinged vocals, sometimes pulling out a harmonica to wail uponThe lyrics are chilling and familiar in this election year. 'Hadestown' is not to be missed!"

"A thrilling new musicalWith her partner, director Rachel Chavkin and this magnificent design team and orchestra  a thing of beauty has been created. While at times it is is more concert than theatre (this was the first incarnation of the piece) the story nevertheless reaches out and grabs you in your wooden seat."

"The casting is nothing less than superb...Chavkin's masterful direction holds everything together beautifully. It's not perfect. Some of the narrative themes, particularly in the first act, were either confusing or underdeveloped. However, it's one of the rare shows that improves in the second act. I'm not sure the production shakes off its concept album roots sufficiently to qualify as a folk opera, but I'm not going to quibble over category in the face of so much talent."

"'Hadestown' manages to be both simple in structure but complex in references...Most of the time the allegory works. Occasionally it is strained...It's a talented cast, and the music is so often devilishly enticing that it is easy to forgive it some dramaturgical gapsThe love story could have used an injection of sizzleBeautiful harmonies and evocative performances keep it from drifting too far into the didactic. Chavkin and Mitchell craft a vivid space to explore a probing political agenda."

"'Hadestown' is a superbly interpretive and entertaining work of story told through music. With a musical score by Anais Mitchel and directed and co-developed by Rachel Chavkin, the show is a remarkable story re-telling with fantastic music, song, and dance...With folky tunes, upbeat rhythms and even an Andrews sisters trio (representing the Greek chorus of Fate) the entire production was absorbing and astounding."

"Anaïs Mitchell's 'Hadestown' is a faithful retelling of this epic myth with a deep connection to the present and the plight of the 99 percent. Orpheus' journey to rescue Eurydice from Hades and death and the gripping journey of the pair to the very Gates of Hell has never been more clear or more compelling...Ms. Mitchell's scintillating 'Hadestown' quickens the deadliness of our current political maelstrom and the social ennui it so weakly attempts to address."

"It's a show with ambition and talent to spare, but also a frustratingly muddled storyThe musical numbers by Stew and Rodewald move fluidly from gospel to James Brown-flavored funk to Prince-ified pop, and Blankson-Wood is a wonderBut the text by Stew lacks focus and refinement. The central conflict between Joe Roy and Marty is undercookedThere's a great musical buried somewhere inside 'The Total Bent,' but it will take some further excavating to draw it out."

Broadway and Me- Highly Recommended

"Mitchell and the ever-inventive director Rachel Chavkin have transformed the song cycle into a theatrical piece that sticks close to the main storyline but they've added a down-home Louisiana vibe that is alternately sweet and peppery and deliciously satisfying...The multiracial cast is terrific, except for Damon Daunno's Orpheus who is charming but strains when his songs venture into falsettoBest of all, however, is Chris Sullivan, who plays the world-weary narrator Hermes."