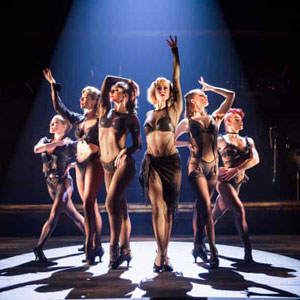 "...In the pulse-racing revival of the musical 'Chicago,' which opened last night at the Richard Rodgers Theater, all the world's a con game, and show business is the biggest scam of all. It makes a difference, though, when the hustle involves a cast of top-flight artists perfectly mated to their parts and some of the sexiest, most sophisticated dancing seen on Broadway in years. By the time the priceless Bebe Neuwirth, playing a hoofer turned murderer, greets the audience at the beginning of the second act with the salutation 'Hello, suckers!,' it's a label we're all too happy to accept. The America portrayed onstage may be a vision of hell, but the way it's being presented flies us right into musical heaven."

"...Because the revival of "Chicago" is so wildly entertaining, I'm hesitant to call it important - always an ugly adjective for a reviewer to use - but I'm afraid I must... What makes "Chicago" - here's that dreaded word - important is that it reminds us that musicals are about songs and performers, not scenery. When you have material and performances as dynamic as this, you don't need chandeliers."

"A lot of Broadway musicals don't age very well, but the long-running revival of 'Chicago' seems to have discovered the fountain of youth. The score's catchy melodies are potent, toe-tapping reminders of music from the late 1920s, while the lyrics are snappy, pointed and often very funny."

"...The sexiest show on Broadway...has enough show business razzle-dazzle to help audiences overlook the fact that what they're seeing is basically a staged concert. In fact, most people won't even notice, and this smashingly performed revival should have a significant run...Particularly noteworthy is the score by Kander and Ebb, which, shorn of elaborate sets and costumes (there are a few chairs, but that's about it), shines more brightly than ever before."

"...Any gripes about the producers of "Chicago" charging full-scale prices for a stripped-down show evaporate like vapors from bathtub gin the second Bebe Neuwirth & Co. open the show with a pulse-quickening rendition of "All That Jazz." This concert staging, wonderfully choreographed by Ann Reinking (with a credit to "the style of Bob Fosse"), is a bit more elaborate than when presented by City Center's Encores series in the spring, but even if it weren't, the performances, wit and sophistication of the show would more than earn a place on Broadway."

"...Without cosmetic surgery, this show seems too modern, too knowing to be 21 years old...And it's not because this roaring '20s story of two women imprisoned for crimes of passion has many modern parallels. The new production is stripped down to the distilled essence of Broadway theater...It's so undiluted, it's show biz administered through intravenous injection...Director Walter Bobbie keeps surprising you with what arises from an otherwise bare stage...It all brilliantly supports the stars and the incisive stories of ignoble behavior they tell."

"To paraphrase a lyric, this revival is heaven nowadays."

"...If you've had it up to here with sentimentality, piety, and a positive view of mankind, this rollicking revival...will lift your spirits to the sky...But it's not only the playfully cynical theme that's the grabber. It's the execution (if you'll pardon the expression), in one of the best-written and best-performed shows to hit Broadway in years. When they say they don't do musicals the way they used to, "Chicago" is the kind of winner they're talking about...Totally absorbing...Simply, one of the most entertaining shows around."

"...A show that, for all its own style and sass, is still basically a stripped-down concert presentation, without full sets and costumes...Instead of the period sets and costumes that gave the story much of its flavor, there's only a black box setting, basic black costumes and an orchestra seated on a raked bandstand in the background. When they're not performing, cast members move to seats at the side until it's time for them to jump back into action. Working within these limits, Reinking has created some splendidly slinky dances, inspired by and derived from Fosse but not slavish in their devotion to him."

"...[Chicago] is a show that doesn't just give us the old razzle-dazzle; it glows."

"...It's past time to admit Chicago to the pantheon of great American musicals...The Kander and Ebb score hasn't a weak song in it; from "All That Jazz" to "Mister Cellophane" to "When You're Good to Mama," it justifies comparison with the best ever written. It also dangles loads of incentives to dance, and in this revival choreographer Ann Reinking has brilliantly exploited them in the incomparable style of Fosse, her mentor...Chicago is revealed not just as the musical classic it is, but as a show with particular resonance for our time."

"...Scintillatingly cynical...Kander & Ebb's sizzling score sounds better than ever, the story is more timely than ever and the only spot you'll ever see a better cast than this one has got to be in heaven--or hell, since the show presents such a wicked celebration of Broadway song-and-dance expertise...Director Walter Bobbie strips the musical back to its barest essentials of sardonic comedy, music and dance...Fiercely funny and lots more tuneful than you might expect...A tremendously good time for adults."

"What it's all about: 'murder, greed, corruption, violence, exploitation, adultery and treachery.' Of course what it's also about is sensational dancing, singing, acting...and, fun! No razzle-dazzle mechanical props, just the razzle-dazzle of a company of gifted performers delivering two hours and twenty minutes of show-stopping numbers."

"Chicago is as good now as it's ever been--a heartening experience, a life-affirming dedication to the magic and art of theatre, and something that absolutely should not be missed. Though all shows must eventually close, the glory and genius of Chicago should be celebrated while it's here, and with any luck, it will still be gracing and energizing Broadway for many years to come."

"Cynics predicted that the big-screen opus would mean the end of the show's Gotham run, but the opposite has occurred for this Encores!-originated revival...the show is now an SRO proposition. During intermission, audience members may be heard debating the comparative merits of the live and canned treatments."