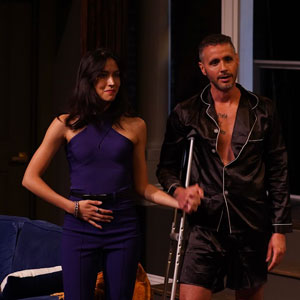 Cat on a Hot Tin Roof

Average Rating based on 3 reviews

"...Perhaps stronger direction might have improved these performances. Joe Rosario's direction, though, actively harms his actors whenever it isn't straight-up lazy. It's silly enough that Rosario's wafer-thin concept of setting Cat on a Hot Tin Roof in the present day extends only to some of Xandra Smith's contemporary costuming, a supporting character with headphones around her neck, and a split-second snatch of Miley Cyrus's "Party in the U.S.A." (Matthew Imhoff's scenic design, by contrast, evinces no period at all, with only a generic-looking digital projection of a magic-hour sunset to evoke any sense of place.)"

"...Cat on a Hot Tin Roof may just be the high point of Tennessee Williams' career bringing him his second Pulitzer Prize and much acclaim before the long slide of his later years. After five starry Broadway revivals, the Williams estate has licensed the first Off Broadway production and the long, uneven current Ruth Stage production at Theatre at St. Clement's may demonstrate why they waited until now."

"...The version of Cat on a Hot Tin Roof being presented at St. Clements is the one that Williams restored for the 1974 Broadway revival that starred Elizabeth Ashley and Keir Dullea. Profanity has been put back in, along with passages that director Elia Kazan had Williams remove from the original 1955 production. There is more good news: two of Gooper and Mae Pollitt's "no-neck monsters" didn't make the final cut. The result, Fraser feels, may shock patrons, especially those who remember the even more neutered movie."