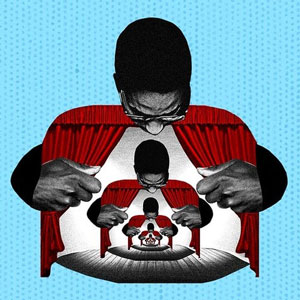 Average Rating based on 27 reviews

"...But "A Strange Loop," Michael R. Jackson's Pulitzer Prize-winning meta musical about a Black queer man's self-perception in relation to his art, is radical. And I definitely mean that as a compliment."

"...I found "A Strange Loop" most interesting in its determination to take us inside Usher's head and on his journey. It is less compelling toward the end when it dissolves into a parody of lower middle-class reality. It is enlightened in its understanding of a mother's love, even in the face of disapproval, and in the notion of imposter syndrome, which so many people feel today. Its creator is too young to know that you worry less about sexual desire as you age, that you then tend to search for love over division and that you don't so much want to be at the center of your own story anymore."

"...Every once and a while - sadly, too few - we get something that pushes the musical theater form completely, taking an utterly unforgettable, idiosyncratic trip. Add Michael R. Jackson's "A Strange Loop" to the list that includes "Fun Home" and "Angels in America," both of which have echoes here. Like them, it is astonishing, challenging and awesome."

"...At breathtaking speed, for an hour and 45 minutes, Loop continues whirling on like this: the Big Ideas and the petty ones waltzing around in Jacksons profane, hilarious, meta-musical carousel. Its less vicariously exhausting than it was Off Broadway, perhaps because the company no longer wrecks itself physically with every performance  but its still furious, both with the world and itself. The shock of that sharp emotion strikes like a lance. Especially in the Lyceum Theatre: Its a red-velvet-and-gilt balloon, and Jackson makes it go pop."

"..."A Strange Loop" is heady and wordy; Jackson's score is more linguistically than musically inventive, and it's an unfortunate consequence that some lyrics get swallowed up in the larger space. There's a feeling of surfeit messiness, like a sprung-open closet whose chaotic contents fill the room, that a Broadway house allows audiences to appreciate with greater perspective. It's like stepping back to admire an extraordinary portrait of the artist as a tangle of contradictions, desires and painful memories. In other words, it's like the experience of life itself."

"..."Ouch!" is the main takeaway of the intriguing, autobiographical new musical "A Strange Loop," which opened Tuesday night on Broadway. It's blow after blow after blow. And then some metaphorical slaps, kicks and scratches for good measure. There's so much pain felt by the main character that you leave gravely concerned for the emotional well-being of the man who wrote and inspired him."

"...At the end of A Strange Loop, Usher declares that change is just an illusion. It just might be, but Broadway is already proving Jackson wrong. The mere presence of his work on the Great White Way is showing the beautiful possibilities of the form."

"...In spite of inventive touches, satirical humor, fluid production values, and songs full of both spark and sensitivity, "A Strange Loop" ultimately falls victim to the perils of its own design, becoming so messy, whiny, confrontational, sexually explicit, and theoretical that it will probably turn off many theatergoers while invigorating and thrilling plenty of others."

"...The center of entertainment gravity on Broadway has moved to a new address. It's now located at 149 W. 45th St., site of the Lyceum Theatre and the explosively imaginative "A Strange Loop," which, if there is a theater god, will redefine the parameters of a big commercial hit."

"...A Strange Loop is a wild ride. In a Broadway landscape dominated by shows that often seem designed by corporations for audiences of focus groups, Michael R. Jackson's musical is the defiant product of a single and singular authorial vision. This wide-ranging intravaganza takes a deep dive, often barely coming up for breath, into a whirlpool of ambition and frustration as Jackson's seeming alter ego-a queer, Black writer-composer named Usher (Jaquel Spivey)-struggles to define himself amid traps of sex, race, family, body image, religion and entertainment. It's screamingly funny and howlingly hurt, and it's unmissable."

"..."A Strange Loop" is genuinely breathtaking because it forces you to gasp before you break out laughing. It's also a brilliant antidote to musicals like "The Color Purple" and "Paradise Square," which let us know God created Black people to take care of the white Miss Annes of this world. "Loop" is that rare musical that doesn't have its Black characters caterwauling (see stage direction above) unless as a form of parody."

"...Fluidly directed by Stephen Brackett, with Raja Feather Kelly's clever choreography punctuating Jackson's delightfully brash score, A Strange Loop grabs hold of us the moment Usher concludes that funny introduction. If the show begins to lose a little steam - but just a little - towards the end, it's only because Jackson has already made his points so clearly, pointedly and winningly."

"...I never thought I'd see anything on Broadway quite like "A Strange Loop," Michael R. Jackson's Pulitzer Prize-winning musical that probes the inner reality of a 26-year-old Black, queer artist who's trying against the odds to transform his alienation into art."

"...Jackson's incisive observations about the transactional nature of the gay dating scene, the marketability of Black suffering, and the tyranny of expectations when it comes to art and identity make A Strange Loop a worthwhile endeavor. But what makes the show truly delightful is that these ideas are set to one of the most tuneful scores to arrive on Broadway in years. I've been humming the songs daily, reliving the candid ambivalence of "Second Wave," the heartbreaking beauty of "Memory Song," and the naughty zest of "Exile in Gayville.""

"...Jackson's explicit portrait of a lost soul's salty journey is alternately stunning and amusing, appealing and appalling, told at a breakneck pace through his book, lyrics and music. It's a rare, if dispiriting, portrait of a gay man who isn't a paragon, a man who isn't conventionally handsome, successful or rich."

"..."WOW!" I thought to myself as my body leapt to its feet on its own volition to applaud A Strange Loop. "This must be how people who saw the first performances of Show Boat, Oklahoma!, Company, Rent, or Hamilton felt." Though I've witnessed and studied the innovations in each of those musicals, none of them are as revolutionary as what Michael R. Jackson has accomplished with his Pulitzer Prize-winning musical, now making its Broadway debut."

"...There have been countless musicals on Broadway, their qualities ranging from poor to excellent. Then there are juggernauts that disrupt the form, catching audiences completely off-guard, leaving them with an overwhelming sense of introspection and exhilaration. A Strange Loop is one such show."

"...What one expects from A Strange Loop going into the theatre is completely different from what one gets coming out. The expectations going in are for a "Big, Black & Queer American Musical!" as the poster tells us, a laugh riot, and in fact it is just that for the first half. The agony comes in the second part; of what it's like to "travel the world in a fat, Black, queer body" and the pressures that go with it in the first song sung by Usher, "Intermission Song.""

"...Part of the joy of watching the Pulitzer Prize-winning A Strange Loop on Broadway is precisely because of where we are sitting and what we are watching: this show, about the life and thoughts of a creative, questioning young queer Black man, is being performed right here right now (at the Lyceum Theatre, booking to September 4) in front of a Broadway audience. The fact this reporter saw this one night, and the next day Billy Crystal in Mr. Saturday Night, hopefully says something about what an evolving ecology of Broadway can look like."

"...A Strange Loop is profanely funny and courageously raw, but on a second viewing (I reviewed its world premiere Off Broadway in 2019), it's also claustrophobically fixated on the wounds of youth, a howl of rage at gay lookism, white gatekeepers, and toxic Christianity. All those targets deserve to be howled down to hell. But Jackson is 41 years old; his avatar is identified as 26. That's a telling gap, one that permits a rebel's outrage rather than a middle-aged artist's mellower view. The lack of self-awareness combined with merciless self-examination comes to a bathetic head when Thought #1 says, "[it's not about] Tyler or your parents or anybody else. And as scary as this world might seem, all of this ugliness ... this pain and anger ... is about you. So how about you focus on yourself?" Which is rich after 90 minutes of Usher running screaming around his hall of mirrors."

"...Anyway, because the review schedule was set, and Broadway News didn't want to overload its critics, and because "A Strange Loop" has lived rent-free in my mind since I saw it off Broadway in 2019, here I am now. But as I am writing this, it occurs to me that what Jackson does with "A Strange Loop" isn't just write a musical with catchy tunes and clever lyrics. He's also successfully testing the conceit of how the universal is rooted in the specific. In making the lead character a fat, Black gay man, within an industry (and larger society) that prioritizes and idolizes skinny, white bodies, Jackson is making a Black gay man an embodiment of the universal."

"...In crafting a work so joyously and painfully honest, playwright, composer and lyricist Michael R. Jackson walks a fine line. A Strange Loop is a carefully structured piece, lean and quick-paced. Yet it is also a manic mess, a frenzied collage that stays true to its central premise of hurtling through the chaotic depths of one man's rage, trauma, and self-hatred."

"...The standard advice for aspiring authors is "Write about what you know." In the case of A Strange Loop, both librettist-composer-lyricist Michael R. Jackson, and his motley but magical protagonist Usher, have chosen to write about what they want to know: namely, the key to identity; the answer to the age-old riddle of human consciousness. It's like the kid sang in A Chorus Line, "Who am I, anyway? / Am I my resume?," but more profound."