A Man Of No Importance Reviews 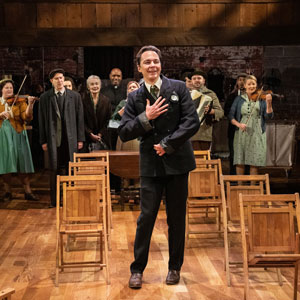 A Man Of No Importance

Average Rating based on 7 reviews

"...You couldn't have predicted from "Ragtime," which ran on Broadway for two years in the late 1990s, that its authors would follow up with something as vastly different as "A Man of No Importance." Yet that's what Stephen Flaherty and Lynn Ahrens, who wrote the songs, and Terrence McNally, who wrote the book, did in 2002. Their second musical is as quiet, delicate and Irish as its predecessor is loud, meaty and American. Instead of bleating big themes, it ekes feeling from repression in telling the story of a character who does the same."

"...The satisfactions of this revival of A Man of No Importance are all in that smaller-scale fiddling: both literally, in the sense of a bit of violin-playing onstage, and in a cast of supporting performances all crafted with delicacy. The musical is itself a relatively minor affair based on the 1994 film starring Albert Finney as a closeted 1960s Dublin bus driver who organizes community-theater productions of Oscar Wilde plays with his group, the St. Imeldas Players."

"...Parsons, who became famous on the TV sitcom "The Big Bang Theory" and has done some excellent work on the New York stage over the past decade in plays such as "Harvey" and "The Boys in the Band," makes for a genuine and affectionate Alfie. He is joined by an outstanding supporting cast that includes Mare Winningham, A.J. Shively, Shereen Ahmed, and Mary Beth Peil."

"...That's a blessing, because A Man of No Importance is an underrated musical that deserves a second hearing in this town. It's not just about one man, but the ways community can both oppress and uplift him. In 2022, with our rainbow of fragmented sects and tribes, we still haven't broken free from that dynamic."

"...As Alfie contemplates his sexuality, mounts an Oscar Wilde play, and seeks to better understand himself through art, the well-sung production glides along at a comfortable pace. For those looking for a wholesome escape and a charming story, abide by Dublin superfan Robbie's words: "come out with me, and you'll see what you're missing in life.""

"...I wish Doyle had swung big with his final effort at CSC, making a bold exit statement and commenting on his own abilities as a director. With this, the Man is certainly of importance, but is leaving this six-year tenure dead behind the eyes."

"...Relentlessly underlining the muted tones (also undoubtedly Doyle's request) are Ann Hould-Ward's costumes. Look in vain for a bright color among them, not for always reliable venerables like Mary Beth Peil, Alma Cuervo, and William Youmans as they portray kind and gentle citizens of the Emerald Isle."