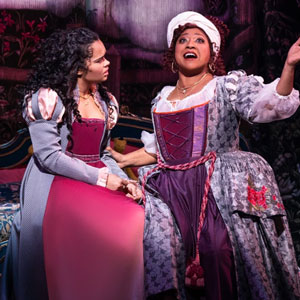 "...The overcompensation  two confetti explosions?  is unnecessary. Jukebox musicals may still be bottom feeders, but, as & Juliet proves, there are sometimes small treasures to be found in the murk. And as long as theyre going to keep arriving regardless, I have to admit (citing Martins hit for those theater critics the Backstreet Boys) I want it that way.

"...If you were to adapt the feeling of getting day-drunk on cheap rosé for the stage, youd get & Juliet. The aggressively effervescent musical has come to Broadway, & it intends to wash you away in the blushy delights of pop feminism & hit singles & middle-school-level Shakespeare jokes. At times, such as when someone belts the chorus of Since U Been Gone at you, it is impossible not to feel intoxicated. & at others, such as when any character tries to explain any part of this shows plot, you may feel as if the world has started to spin desperately out of control."

"...The Bard takes a back seat to the Backstreet Boys and Britney Spears in & Juliet, a jukebox musical that is being billed as a sequel to Shakespeares Romeo and Juliet, imagining Juliets life if she hadnt killed herself when Romeo did. The plot winds up more busy and berserk than that description, and, in any case, the show is primarily a vehicle for the hits of Max Martin."

"...Shakespeares Juliet singing Britney Spears OopsI Did It Again is certainly a surprising and unexpected juxtaposition. While there is every reason to be skeptical of a Shakespearean jukebox musical, & Juliet makes it work remarkably well. Its the most fun youll have in a Broadway theater right now."

"...& Juliet is a millennial-seeking missile aimed at audience members, such as myself, who grew up on Martins catchy tunes. And those nostalgic memories are surely why the phenomenal young cast is visibly enjoying themselves a lot more than your usual company of Jersey Boys does."

"...All things considered, the fashionable flare and youthful exuberance on display in & Juliet (as directed by Luke Sheppard and choreographed by Jennifer Weber) are often entrancing, and Martins songs (as arranged and orchestrated by Bill Sherman) are undeniably catchy. Perhaps the next karaoke makeover of a Shakespeare play will be even better."

"...It all feels comfortingly familiar and indistincttheres not much narrative thrust to Jennifer Webers synchronized hip-hop choreography, which mostly suggests energetic background dancing at a concertand the ideal place for it might be the high school auditoriums where it will surely enjoy a rich afterlife someday. But theres no denying the relentless effectiveness of Martins earworm craftsmanship. & Juliet gives audiences what they want from it: all those hits, baby, one more time."

"...Juliet is of course the centerpiece of this feminist reclamation, but the true protagonist of the musical is Shakespeare's discontented wife, Anne Hathaway, the author of this pop fever dream. Betsy Wolfe comes alive as the architect of & Juliet's play-within-a-play structure (a fun nod to Shakespeare's proclivity for the device) in a shining vocal and comedic performance that gives & Juliet some of its only moments of subtlety. On the day of Romeo & Juliet's grand debut, Anne unassumingly suggests the ending of her husband's play needs a feminist overhaul  though the plea is clearly more personal than literary (Wolfe is well-matched with the perpetually boyish Stark Sands who brings an impish charm to his performance as the Bard)."

"...& Juliet is a very dumb show in many respects, but immensely satisfying and just a ton of fun. Dont bother trying to resistyou will have a blast."

"...Another well-received export from London's West End where it broke box office records and played to standing-room-only audiences, & Juliet is a unique jukebox musical because it doesnt tell the story of its composer or its singers. It is a clever reimagining, telling the well-known story through music by Katy Perry, Backstreet Boys, Taylor Swift and PinkI"

"...The two young women sitting directly in front of this critic were having the best time at Broadway musical & Juliet (Stephen Sondheim Theatre, booking to May 28, 2023)seat-bopping throughout, and smiling delightedly. The two people behind loudly beheld that it was the worst thing they had seen on stage in a long time. In between both parties, this critic sat, feeling the contrasting passions of both."

The Observer- Not Recommended

"...By the end of two-and-a-half hours of this torture, exacerbated by the tumultuous applause of a young audience acting as if they were cheering the World Series from the infield seats at Yankee Stadium, I felt like I was on the verge of a nervous breakdown. & Juliet is quite the most excruciating experience Ive had on Broadway in decades."

What & Juliet lacks in foundation, it more than makes up for in sheer fun. The placements of certain songs are jokes in themselves. I refused to look at the set list printed in the shows program, instead opting to play a game of which hit will come next and what embarrassing adolescent memory do I associate with it? In fact, playing this game revealed the eonic length of Martins reign in the genre and an industry he has had an undisputed hold over since the mid-90s. While the melodies of & Juliet are well-known, the musical strikes rare chords as an eccentric and explosive new work that for generations of theatergoers is pure entertainment."

"...From the start, the production feels like an overproduced theme park diversion, with ensemble members quirkily interacting with the audience and, Shakespeare-style, the fourth wall constantly broken by its storytellers. Everybodys so gay, kind of! my date remarked. Its true, a certain they/themification runs through the exceptionally diverse cast, clad in Paloma Youngs strange, hard to pin down costumes. In David West Reads book, we meet the man himself (a winning Stark Sands) as he prepares for the premiere of his star-crossed tragedy, and his wife Anne (Betsy Wolfe, carrying), who is just happy to be out of the house."

"...Mix the single-artist salute Mamma Mia! with the contempo-pop stylings of Moulin Rouge!; add a healthy dose of the Shakespeare-themed Something Rotten, and a sprinkle of the Renaissance-grrl-powered Six and youve got some idea of whats in store for you at & Juliet, the candy-colored glitter bomb of a show that just opened at the Stephen Sondheim Theatre."