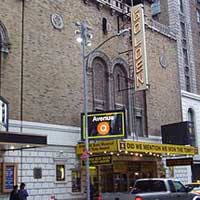 Average Rating based on 17 reviews

"...In 2002, Parks won the Pulitzer Prize for Drama for Topdog/Underdog, becoming the first African-American woman to win in that category. It was an achievement not just for the experimental playwright, but for the discipline, too. It would be easy (and depressing) to delineate the ways in which the world  two decades later  has and hasnt changed, to exclusively map Lincoln and Booths roving and twisted conversation onto a broad sociological thesis. But we shouldnt lose sight of the wizardry of Parks work, its ambition, dexterity and biting humor. We shouldnt think so hard that we forget to look into her eyes  or, more accurately, at her work  and focus."

"...Dystopian literalism bleeds into all the proceedings here, moving like a wheel within a wheel. Afro-pessimism isnt a genre in which Id usually place Parks, let alone Leon. But played without winking in a key of aggrieved, stressed-out toxic masculinity, as it is here, Topdog/Underdog is able to hit that note convincingly. I suppose we shouldnt be surprised that this play had another card up its sleeve."

"...A key to appreciating Topdog/Underdog is understanding that it was never really here and now. The play is less a literal depiction of two down-and-out Black brothers than a smart, dark, often funny allegory, with subtle allusions to the Bible (Cain and Abel) and less subtle similarities to classic Theater of the Absurd."

"...There is an underside to the thrill of an overdue revival of Topdog/Underdog that feels so decisively plugged into the moment. Its true that too little has changed about the system that demeans Black men, that demands hustle and consumption even as it consumes everyone in its path. Its also true that the play distills much more than how people are shaped by social forces, burrowing into what makes them tick. Its a time bomb that will always be ready to detonate."

"...Director Kenny Leon has helmed a sharp, focused revival of the 2002 drama, with a pair of cracking performances that never let up."

"...There are hints of this animosity throughout the play, from the way Lincoln shoots Booth stares of resentment, now that he'e been forced to live under his little brother's roof, under his rules. Booth's playful spirit is just one edge of a sword that can turn deadly serious when provoked, even slightly. But from their naming, the abandonment by their parents, and the circumstances of their lives, these characters have to fight their own destinies to survive."

"...Regardless, the production excels in the sharp and textured interplay between Abdul-Mateen (restless, longing, cocky, hurt) and Hawkins (weathered, mature, guilty, smooth), in which comedy-laced routines eventually culminate in showdown and tragedy."

"...If "Topdog/Underdog" seemed prescient about violent dead-ends for the American underclass in its off-Broadway debut at the Public Theater 20 years ago, the version that officially opened Thursday night at the Golden Theatre comes across as even more ferociously of the moment. Under the direction of Kenny Leon - a longtime Broadway hand here masterminding the best production of his career - the fierce rivalry and protectiveness binding this Lincoln and Booth convulses in a shattering denouement."

"...Suzan-Lori Parks' "Topdog/Underdog" is a phenomenal two-brother drama, every bit as intense and rich as anything by Sam Shepard and, frankly, as good an American play as most anything written during the last quarter century. And on Broadway, the director Kenny Leon has put this 2001 masterpiece back on a fresh, vital pedestal."

"...Playing out entirely in the cramped, sparsely furnished apartment  impeccably designed by Arnulfo Maldonado for just the barest of transformations when necessary  Topdog/Underdog has been given a terrific production here. Dede Ayites costume design is, like the play itself, an entirely credible blend of the mundane and the ever so slightly fantastical: the Honest Abe costume is at once creepy, funny and powerfully disturbing, and the flashy, tacky suits swiped from a store by Booth have just the right hint of the 1970s to suggest Topdog/Underdogs sense of being haunted by the past."

"...Even by today's "seen it all" standards, the premise of Suzan-Lori Parks's Pulitzer-winning Topdog/Underdog is audacious. More than audacious. In an era of TV reboots, superhero action flicks, and jukebox musicals, this 21-year-old drama proves once again to be one of the most original plays ever to be seen on old Broadway. What a thrill it is to be in the presence of Kenny Leon's new revival at the Golden Theatre, where two exciting actors  Corey Hawkins and Yahya Abdul-Mateen II  are picking up the cards and giving us a singular night of theater."

"...Two-character plays are difficult as there are only two actors  or one  on stage to carry the ball at any given time and a good deal of invention is needed to maintain interest. Susan-Lori Parks Topdog/Underdog handles this beautifully and never lets attention flag for a moment. The title is ironic as which is which keeps shifting throughout the play. Yahya Abdul-Mateen II and Corey Hawkins add to their impressive and growing resumés with these captivating and compelling performances. It is to their credit that every time they come through the door of the apartment we worry that they have more bad news. Director Kenny Leon continues to demonstrate his skill with staging contemporary classics with discernment and understanding, bringing his insight to very different American masterpieces."

"...Revisiting Suzan-Lori Parks 2002 Pulitzer Prize-winning play is what could be called a brilliant revival, thanks in large part to Ms. Parks rhythmic writing, superb acting by Corey Hawkins and Yahya Abdul-Mateen II, laser focused direction to every detail by Kenny Leon, and a claustrophobic set by Arnulfo Maldonado, bring a sharper focus than I remember from the 2002 version at the sprawling stage of the Ambassador Theatre and looser direction by George C. Wolfe."

"...Suzan-Lori Parks Topdog/Underdog (Golden Theatre, to January 15), directed by Kenny Leon, is a brilliant, electrifying piece of theater for many reasons. One of those is, at around two hoursm 15minutes, while it could reasonably expect its audiences to sit for its duration, its structure imposes an interval at the best moment. Bam, lights out, and that happy buzz of an audience who cant wait to swap notes, take a bathroom break, get a drinkand then get straight back to their seats to see how it all works out."

"...For all of the circularness of Topdog/Underdog, Leon does a great job of finding its dramatic points. With only two actors and a room, the play serves up a harsh account of the ills faced by Americas underdogs but does so with enough laughter to help the med-sin go down sweet. Gambling, cheating, stealing  you almost forget they are sins in a play this holy."

"...The two actors have excellent chemistry and are believable in their brotherhood and shared pain. Parks writingthe way she builds and releases tension; constructs vivid histories out of thin air; broadens the scope of her story without ever losing sight of the people onstageis still excellent; that wont change. But a production of Topdog/Underdog should feel like American mythology, something worthy of the texts well-earned Lincoln/BoothCain/Abel comparisons. The dramatic drapery Maldonado places around the studio apartment suggest something bigger, a grand veil of theatricality covering a national schism. Much of the production, however, only gets at the worlds best-looking arcade exhibit.'

"...Reviving a classic the caliber of Suzan-Lork Parks Topdog/Underdog, which deserved and won a Pulitzer Prize in 2001, is a bit like a high-stakes version of three-card monte. There are so many ways that the contributing elements, no matter how distinguished the contributors, could surface to throw the game. In this production, every single aspect turns up a winner."