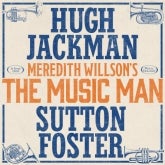 The New York Times- Not Recommended

"...Unfortunately, that flatness is endemic to the production. The central element of Loquasto's set is a full-width barn wall whose doors occasionally slide open to reveal vignettes played out against drops painted in the style of Grant Wood (another Iowan). But even when the barn disappears completely, the staging feels two-dimensional - and so old-fashioned (except for the astonishingly good dancers performing Carlyle's athletic choreography) that it might have come straight from 1957, when "The Music Man" premiered on Broadway. Or even 1912, when it's set."

"...The musical's script has always ended a little abruptly, without a huge rousing number. But at the Winter Garden Theatre, it leads into an impromptu dance party where it feels like every single one of the 76 trombones is rocking out and the performers are just loving the moment. This "The Music Man" starts on a train and feels like a ride you never want to stop. As the conductor says at the beginning: "All aboard!""

"...The production features a bounty of riches in the cast, with many of the supporting players seeming almost too qualified for their roles. There are no less than four Tony Award winners among them, including Jefferson Mays and Jayne Houdyshell as the suspicious mayor and his wife, Shuler Hensley as Hill's accomplice and Marie Mullen as Marian's mother. The pleasure each of them seems to be taking in doing their broad comic shtick proves infectious. Tyke actor Benjamin Pajak is delightful as Marian's socially withdrawn little brother, as are the large number of other children in the cast, who sing and dance as if they've been treading the boards for decades."

"...Stars have their own style of stardom: Jackman's is always Jackman's. When his character, Harold Hill, lets something slip, Jackman lets us see that he, Hugh, the magnetic movie idol, catches it - he makes visible how hard he has to work to keep up with the astonishing dancers around him, or he breaks character just a smidge (I've seen it twice, and this seems to be a pattern), a sparkling con that dazzles and flatters the audience. Foster, though, has the other kind of star quality: gravity as opposed to shine. She's so physically precise! She drops a shoulder, it's enough to button a scene. She drops her voice? She can turn anything into a joke. Funny, wry, deep, kind, her Marian Paroo draws our sympathy until the whole show rotates around her."

"...Sometimes the show is dark and moody, determined not to have too much fun with a story about a con artist who wins in the end despite his misdeeds. At others, it's the "Music Man" of our cringeworthy high school memories - painfully corny when it need not be. The friendly opening night crowd was not sure when to laugh at the jokes, and that's a major problem for a musical comedy."

"...The Music Man's story of duplicity and redemption could have deeper resonance today than ever, but this incarnation sticks resolutely to the surface. As River City gives itself over to the spirit of "Seventy-Six Trombones," we are offered a diverting succession of songs and extended dance breaks, especially for the actors playing children. (Little Benjamin Pajak is a treasure as Marian's shy, lisping illegitimate son-sorry, younger brother-Winthrop.) But is that enough to justify the ticket prices that The Music Man, on the basis of its pedigree, currently commands? Or are audiences being slightly conned, in effect if not intent, by a production that overpromises and underdelivers? The show is fine; it hits its marks. But at these prices, the marks might be us."

"...But for the most part, this is very much "The Music Man" you remember - perhaps from the 1962 movie starring original Broadway star Robert Preston, perhaps from the endless amateur productions that have been mounted worldwide for more than six decades. And while he might not seem very convincing as a huckster, Jackman once again proves to be a ringleader in the best sense: commanding the spotlight when he wants our attention, and then giving his marks the slip and retreating into the shadows to allow other lights to glisten."

"...Warren Carlyle's energetic, song-and-dance choreography blends vaudeville panache, ballet and pre-Depression dance craze, hitting all the right spots at all the right angles. Still, anyone who has seen the thrilling moves of MJ or the boundary-pushing explorations of Flying Over Sunset might be left a bit un-wowed. Like so much else with this Music Man, from Loquasto's attractive, wheat-colored turn-of-the-century costumes to Brian MacDevitt's autumn lighting, the dancing is expert - effortless even - yet still and all underwhelming. The Music Man lives up to every expectation except the most crucial one: Surprise."

"...Jackman is Professor Harold Hill, that famed con artist who doesn't know the territory and gets more than he bargained for in River City, Iowa, when he meets Foster's Marian Paroo, the emotionally withdrawn librarian who's instantly onto his antics. When Marian's shy little brother Winthrop (Benjamin Pajek, the one cast member you leave talking about) bursts out of his shell with the promise of a gold cornet and a uniform with a stripe on the side, Marian can't help but fall, just like the rest of the town, for this silver-tongued con artist. And he's fallen right back."

"...This season it's "The Music Man." The excitement is palpable in the theater before the show begins. After months of darkened theaters and then the temporary closings as crew members got sick, theater feels like a privilege. If you're going back, what better way than with "The Music Man'' and lots of smiling happy faces, on stage and in the audience."

"...Broadway veteran Jerry Zaks' direction is confident and effective. Choreography by Warren Carlyle pays homage to the original staging but also infuses the show with today's athleticism and physicality. His choreography of the first act appearance of "Seventy-Six Trombones," with the town's kids embodying musical phrases that grow and build, is particularly impressive. The cartoonish color scheme and slightly stylized physical surroundings and costumes by expert designer Santo Loquasto help lift the show into a sparkling, semi-heighted reality. All other production departments are well-represented and deliver admirably."

"...The Music Man's big, perhaps unintended surprise is that it becomes Marian's show. It is Sutton Foster who ultimately commands our attention and applause, and it is Marian's story and transformation we follow most closely. Foster not only sings beautifully, she acts this role perfectly-we follow Marian and hear her because of Foster's intelligent inhabitation of her."

"...Certainly this production is the work of first-rate theater artists. But despite their efforts, there is a fatal lack of chemistry, that admittedly vague and undefinable element, in this revival - between the two leads, regrettably - but also in the whole shebang, as I expect Iowans would say."

"...There is still enough sizzle to fire up admiration for it, especially in Santo Loquasto's gorgeous costumes and scenic designs. Yet another graduate of the Dolly revival-to say it looms large over the production would be a deceit not even Harold Hill could pull off-his backdrops lift directly from Grant Wood, another famous Iowan whose paintings of rural Americana are etched into the national consciousness."

"...The production is dazzling and enjoyable and does what it's supposed to do: keeps the audience enraptured and brings them to their feet in response to a heart-tugging curtain call featuring a bubbly cast in Santo Loquasto's snazzy parade-wear costumes performing Warren Carlyle's fizzy, show-bizzy choreography."