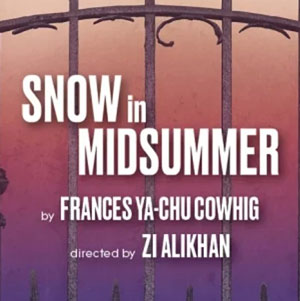 "...In these broad, climactic strokes, Frances Ya-Chu Cowhig's "Snow in Midsummer," at Classic Stage Company, resembles the 13th-century Yuan dynasty drama from which it is adapted, "The Injustice to Dou Yi That Moved Heaven and Earth." A commission of the Royal Shakespeare Company's Chinese Classics Translations Project, the play updates a classical tragedy. But in this Classic Stage production, with hectic, erratic direction by Zi Alikhan, the translation appears garbled, stranding the play among genres and tones. A ghost story, a murder mystery, a family melodrama, and a tale of greed both corporate and personal, it has been staged in ways that confuse place, time and intention."

"...Guan Hanqing's 13th-century play The Injustice to Dou Yi is a relatively straightforward affair that chronicles a harrowing miscarriage of justice and the earth-shaking consequences that lead to a great wrong being eventually righted. For Snow in Midsummer, her contemporary adaptation of the classic Chinese work, however, Frances Ya-Chu Cowhig has not only added modern elements and themes to the plot - a capitalist takeover, a gay relationship, black-market organ harvesting - but also reconfigured it as a supernatural murder mystery. The result, at least as presented by Classic Stage Company in the shaky New York premiere production opening tonight, is admirable but diffuse."

"...Complain as we might about the rapidly rising New York heat, getting snow in midsummer would be a nightmare. So, too, is it in New Harmony, China in Frances Ya-Chu Cowhig's play of the same name at Classic Stage Company, albeit for much graver reasons than needing to dig out your extra layers. Snow in Midsummer backloads and occasionally overextends its drama, but it's a mostly suspenseful watch based on a time-honored story."

"...By play's end, Cowhig's overburdened and overly ambitious narrative ultimately has diminished the powerful potential of Snow in Midsummer. Action in reality, memory, flashback and non-reality further add to confusion of the story through-line. But the excellent cast of actors each have given their all and deserve kudos for that. Also appearing were Wai Ching Ho (Nurse Wong, Mother Can), Paul Juhn (Worker Chen), Julian Leong (Worker Fang) and Alex Vin (Worker Huang)."

"...Frances Ya-Chu Cowhig has put patriarchy on trial in her new play, Snow in Midsummer at Classic Stage Company. Though based upon Guan Hanquing's 13th century folk story, The Injustice to Dou Yi That Moved Heaven and Earth, this vibrant production dives into the consequences of unresolved generational curses as well as the systems that abet wrong doing."