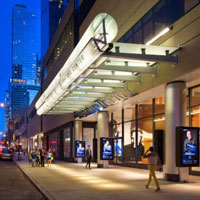 Average Rating based on 4 reviews

"...The premise of "Our Brother's Son," running at Signature Theater Center through June 24, is a promising one, and Charles Gluck, though a first-time playwright, might seem like the right person to explore it: He was a practicing physician for thirty years. But, while the play seems initially like a workmanlike family dramedy, it begins to feel like a missed opportunity....until it takes a sharp turn into an outright misfire."

"...The playwright compensates for this lack of stakes with much screaming in the kitchen over shocking reveals that will make you gasp or guffaw, depending on your taste for these things. It was a mixed bag for me: While I saw Dr. Gluck setting up his dominoes from a mile away, it was still fun to watch the spectacular destruction that transpires when he knocks them all down."

"...The script is so fully packed with conflicts, revelations, betrayals, and disappointments that it runs dangerously close to trying to cover too much material, like a cup of coffee poured so full that only surface tension keeps it from spilling over, and one dares not move it without taking a few sips from the top first. In lesser hands, this play would have its audience overwhelmed and throwing up its hands at each newly introduced piece of information, but it actually works, thanks to brilliant direction by David Alpert, who deftly orchestrates the character builds and disclosures, bringing out stellar performances by the actors."

"...Our Brother's Son suffers from single-issue doldrums exacerbated by symptoms of contrivance, cliche, and casting. It needs a script doctor more than a doctor playwright to prescribe a remedy for relief."