Exception to the Rule Reviews 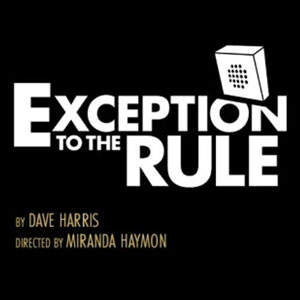 Exception to the Rule

"...Detention is a drag. For the students in Exception to the Rule, its also emblematic. Whatever landed them in the after-school slammer, these teenagers were already trapped by forces far beyond their control."

"...Though there are six characters in Exception to the Rule, one of them eventually emerges as a central figure: Erika (MaYaa Boateng), the kind of seemingly innocent, compliant, academically strong student no one would ever expect to get detention in the first place. She stands in stark contrast to the rest of the students (Malik Childs, Mister Fitzgerald, Toney Goins, Amanda Jahava, and Claudia Logan round out the excellent ensemble), all of them much more volatile in nature, all of them operating with a kind of fearful yet resigned acceptance of being trapped in a cycle of misbehavior and punishment."

"...With Exception to the Rule, provocative playwright Dave Harris takes audiences into the broken carceral system that exists within predominantly Black high schools across the nation. The only problem with this Roundabout Theatre Company production is that it gilds the lily by presenting the action as if it were a thriller, when the play is actually documentary theatre."

"...Director Miranda Haymon keeps everything moving at a fast though clear pace. Haymon's staging is especially impressive considering how small the set actually is. There are moments when two characters have extended dialogue and we are asked to believe that the other four people sitting near them don't hear their conversation. Hopefully, those sequences can soon be better integrated, as this sudden burst of theatricality in an otherwise realistic staging is a bit jarring. In any event, this is impressive work from a director on the rise."

"...Something is not quite right with the intercom in the inner-city classroom thats the setting for Dave Harriss new play, Exception to the Rule. The device seems to be working fine at first, but as a bunch of high school students linger in detention, waiting for a teacher who will never arrive, mysterious static begins obscuring any references to the time of day in periodic announcements, so that the kidswho dont have access to wifilose track of how long theyve been there, or when theyre getting out. The voice on the speaker is crystal clear, in contrast, when it warns ominously of consequences for those who dont follow the rules."