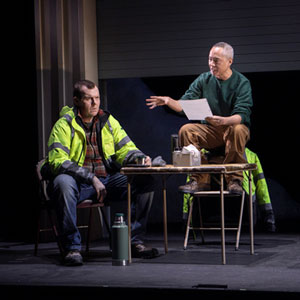 The New Group at The Pershing Square Signature Center

"...In Arberys other plays, this sense of looming catastrophe lurks offstage, just beyond the lights, unembodied. Its front and center here, and so on the nose that it distorts the face around it. All of the characters shout their existential terror  I want to kill myself, We cant breathe, were burning up, Theres something under everything and its making us all want to die  when whispers might have been enough. Similarly, the sense of the numinous, of potencies beyond human understanding, is made explicit and manifest, particularly in an early conversation about dark energy. Arbery and Taymor are hitting us over the head with this stuff. How can we not feel concussed?"

"...Dont listen if someone tells you that Evanston Salt Costs Climbing is about climate change, because you wont go. (Who would?) But this tiny play about love and loss and betrayal in a dying Middle America is something everyone should see and then talk about."

"...We never get a clear-cut answer in this teasingly existential comedy-drama, which becomes more abstruse as it goes on over the course of 100 minutes. That should come as no surprise to anyone who has seen Arbery's previous works, such as the gauzy Corsicana or the brilliantly subversive Heroes of the Fourth Turning. Arbery doesn't need to tell us what nameless terror is on the minds of his two snowplow drivers as they get ready to go out to clear the roads in 2014, the year a "polar vortex" plunged much of the country into dangerous cold. On some level, we already know."

"...Under Taymors direction the actors appear to know what they are doing. However, as there is so little coherent backstory, it is difficult to view the play as anything but a surrealist exercise to be taken as a cautionary tale. As a result, the characters behavior seems entirely unmotivated. As Jane Maiworm, Quincy Tyler Bernstine is sensitive in worrying about the environment and is compassionate about her adopted daughter Jane, Jr. While Jeb Kreagers Peter is believable as a blue collar worker who worries about his truck breaking down as well as the cold, we do not totally understand why he is so angry with his wife and daughter, and considering suicide."

"...An ingenious flash forward, suggesting that our worlds knowledge of the anxiety that our impending doom causes us still yields no actual improvement, is masterful but not enough to salvage the writing. The performances, however, are ferociously good, with Bernstine reaching levels of astute folly and Leung delivering a fearless study of an immigrant driven to near-schizophrenia."