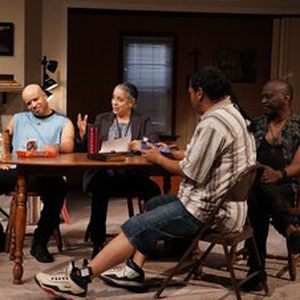 Average Rating based on 8 reviews

"...Bruce Norriss Downstate is the kind of play that takes over your body gradually. Its tension seeps into your limbs, settles tautly in your solar plexus and does not leave. Out on the street after the performance, your every synapse remains on high alert."

"...Downstate wants to make you sit in discomfort as long as possible and see what lies on the other side. Bruce Norriss play takes for its subject the lives of sex offenders. It holds its audience in both the reality of what they have committed and the lives they now live in a shabby group home in downstate Illinois with crumbling furniture, a broken window, and a generic inspirational poster encouraging perseverance. The very premise aims to spark a reaction, but the production is most effective at the level of a simmer: Imagine these mens lives, what they talk about, where the law tells them they can and cant go to get groceries. Dip your toe into empathy, but careful: The waters boiling."

"...Downstate ends in some over-the-top theatrics, a carefully plotted climax that certainly doesnt happen on a typical day, even in the lives of these troubled men. But what were left thinking about is the complicated problem that these characters represent, which is happening every day and everywhere."

"...It will be hard to top the play Downstate, which opened Tuesday night at Playwrights Horizons, for controversy this season. Written by the fearless playwright Bruce Norris, the drama is set in a group home for sex offenders and pedophiles."

"...This produces the first of many laughs throughout this 2-hour, 30-minute tragedy, which Pam MacKinnon directs with the taut timing and precise staging of a farce. She is aided in this balancing act by Todd Rosenthal's set, with its many doors and hiding places, its struggling-to-stay-cream carpet conveying wall-to-wall despair. Adam Silverman's natural lighting peeks in behind drawn blinds, while the blare of a car horn in the driveway (sound by Carolyn Downing) beckons them outside."

"...In Bruce Norris Downstate, directed with visceral immediacy by Pam MacKinnon, Fred (Francis Guinan) gets around in a motorized wheelchair. He seems gentle, unassuming, and genial. Harmless. But Fred is a pedophile in his 70s, and the very opposite of harmless; the harm he has caused is incalculable, and however benign he seems nowand the play treads a queasy-making knife-edge around this very questionthe damage his abuse has wrought is visible right in front of us. The play opens with Andy (Tim Hopper), a man in his 40s, accompanied by wife Em (Sally Murphy), confronting Fred about what he did to Andy when the latter was a 12-year-old boy."

"...Downstate is a stirring, thought-provoking play about a deeply painful topic that plagues societies around the world. Its an extremely tight piece of writing; every word and action is relevant. I cant wait to see it again.'

"...Its tempting to call the play difficult, or uncomfortable, though those elements are very much present. But such descriptions cheapen this uncompromisingly well-crafted work of drama that withholds total catharsis even as it inches towards its edge. Freemans breathtaking performance, against an all-around incredible production, is what brings us back; its shadows guiding us to new, and unexpected understandings."