Death of a Salesman Reviews 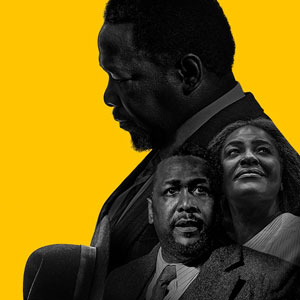 Death of a Salesman

"...The latest Broadway revival, which opened on Sunday at the Hudson Theater, goes wider, a notably rich and mostly successful approach. For the first time in a major New York production, the Lomans are played by Black actors. Wendell Pierce, as Willy, is wrenching as he flails and fails to avoid his fate instead of slumping into it from the start. And Sharon D Clarke, as Linda, is so paradoxically shattering in her stoicism that she turns what is usually portrayed as unshakable loyalty into a kind of heedless comorbidity."

"...Yet this loudly unstated resonance is everywhere in the new productionnot quite enough, perhaps, to transform our understanding of Millers intentions, but powerfully enough to reshape our experience of some familiar beats. Indeed, its almost too easy to play the parlor game of ticking off the ways the Black Lomans (free band name suggestion, by the way) alter the sound and feeling of so many moments without changing a word: Willys line about a law in Massachusetts against this as he speaks to a white mistress; wayward Biffs recurring run-ins with the law; Willys puzzlement at the way he has to work so much harder than other men; his invidious comparisons with his laconic white neighbor, Charley, whose brainy son Bernard vaults past his own sons once high-school football is no longer the playing field."

"...These two formidable talents do give largely invigorating performances, and the recasting of the Lomans as a Black family certainly offers a fresh take on a play thats been steadily produced since its much-acclaimed Broadway debut in 1949. But for all the boldness of the reimagining, and the stellar track record of so much of the cast, Death of a Salesman is a disappointment in several ways."

"...Theres no doubt that casting a Black actor as Willy Loman (for the first time on Broadway, no less) adds a deeper dimension to this monumental role. And who knows what other, future interpreters might find in the character. Its worth remembering that back when Arthur Millers now-celebrated American tragedy originally opened on Broadway, many people were unsettled by the floundering character of Willy. In the postwar America they knew in 1948, Millers protagonist seemed almost anti-American."

"...Salesman, always a long sit, settles on an even-keeled gear early on and stubbornly sticks to it  so the production feels endless. The climactic fight all the way to the inevitable conclusion is not affectingly tragic, and there is no build to speak of."

"...Nearly 75 years after it first premiered, Death of a Salesman still says more than we care to admit about America, about how one can work their entire life and end up with nothing, how you're worth more dead than you are alive, how the system is rigged against the little guy. Maybe the enduring message of this production is that these themes are universal, that we all suffer the same under the yolk of The American Dream. And that, in spite of the odds, we all aspire to be great."

"...The casting builds upon the plays theme of losing out on the promise of the American Dream. This Willy may have believed that being well-liked was his way to overcome the limitations of structural racism. A program note also attempts to justify the concept historically by suggesting that this Willy would have begun his career during the Great Migration to the North and resided in Brooklyns diverse Bedford-Stuyvesant neighborhood."

"...Femi Temowo's blues underscoring is a welcome addition, landing on the ears as richly evocative of New York in the 1950s and supplying a plaintive embroidery to the overarching sadness of the proceedings. For the production is at its absolute best when it simply allows Miller's characters to unfold the anxieties and grievances that multiply under the unbearable pressure to achieve financial security."

"...In the present, though, the show is often superb: the scene between Willy and Howard, ruthlessly played by Blake DeLong, is riveting, amplified by unspoken racism as are the scenes with Stanley, played by the same fabulous actor, here taking what's usually a plot functionary and forging a blend of obsequiousness, kindness and racism, all at once. As Linda, Clarke's monologues are potent, rooted and deeply touching and as Happy, McKinley Belcher III brings far more to that role than we usually see; in this production, the relationship between Happy and Willy seems more central than between Biff and Willy. And Delaney Williams (also known for "The Wire") is an honest, earnest Charley, a decent white guy holding up a Black family in crisis, understanding he's probably next for a cemetery that levels us all."

"...Death of a Salesman, Arthur Millers classic tragedy of the American Dream gone sour, is revitalized and given room to encompass the Black experience in director Miranda Cromwells intriguing production opening at the Hudson Theatre on Broadway tonight. Boasting flat-out terrific performances  Wendell Pierce as Willie Loman and the amazing Sharon D Clarke as his wife Linda  this Death of a Salesman doesnt so much reinvent Millers masterpiece as open its doors to perspectives that enrich the material"

"...We've all been there. With market logic invading all aspects of life, from employment to dating, we are all now forced to be salesman of ourselves around the clock  not just a nation of Willy Lomans, but an entire world. 73 years after it was written, Death of a Salesman is still the great tragedy of our time."

"...Few American plays are revisited on Broadway as often as Death of a Salesman. The play has received six productions in under 75 years, and this latest revival at the Hudson Theatre, brought over from an acclaimed London run, reminds us why. There is always new depth to be mined from Arthur Miller's story of Willy Loman, a man who all but worshipped the American Dream of prosperity through hard work, only to realize he worked his life away for naught."

"...What cache Arthur Millers 1949 classic Death of a Salesman has in terms of power and artistry, nuance, subtlety and insight, is buried by Miranda Cromwells ineffectual staging currently on display at the Hudson Theatre. Neither the director nor most of the cast demonstrate anything but the most superficial connection to or emotional understanding of the material in this orthodox-with-a-twist interpretation, which tells the story of Willy Loman (Wendell Pierce) a 60-something failing salesman whose life and legacy are crushed by the American Dream."

"...Pierces performance from the outset is full-throttle; this Willy Loman is already over the edge when we meet himfeuding with his favored son Biff (Khris Davis), and barely able to acknowledge the other one, the rootless, sex-focused, and supremely ironically named Happy (McKinley Belcher III). Willy is forever manica gale of conflicting smiles, folksiness, booming anger, tenderness, and rudeness around his wife, children, boss, neighbor, and ghostly tormentors. He is the good husband who snarls, a folky, regular guy in freefall, a pillar all too ready to crumbleand what is apparent to everyone else also seems apparent to him from the start."

"...Death of a Salesman is one of the American theaters finest works and, remarkably, Cromwell has taken an even sharper tool to it, toggling expertly between naturalistic and stylistic sensibilities. When Willy has his wits about him, he is jubilant and unexpectedly funny with a towering stature that reminds me of my fathers. When he is bum-rushed by his memories, eerie voices layer, guitar strings twang (original music is by Femi Temowo) and the other actors click into a variety of poses."

"...Watching the new Broadway revival of Death of a Salesman is like witnessing a battle to the death between Arthur Millers enduring classic and the directorial conceits constantly threatening to undermine it. By the end of the overlong evening, Salesman has thankfully won out, as it almost always does. But just barely."