Come From Away Reviews 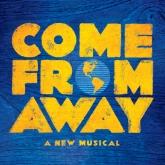 Average Rating based on 6 reviews

"...Try, if you must, to resist the gale of good will that blows out of "Come From Away," the big bearhug of a musical that opened on Sunday night at the Gerald Schoenfeld Theater. But even the most stalwart cynics may have trouble staying dry-eyed during this portrait of heroic hospitality under extraordinary pressure."

"...Besides being an economical choice, the double-and-more casting underscores Come From Away's people-are-people theme. The point is struck somewhat heavily at times. But when the show threatens to feel pat - our opposites-attract travelers fall in love in the space of five days! The Rabbi's kosher cooking feeds Hindus, Muslims, and the vegetarian couple! - it helps to remember this all actually happened. The feel-good events, currently being reenacted roughly four miles from the World Trade Center site, are as much a part of our shared 9/11 narrative as those that still give many nightmares."

"...In attempting to keep track of so many different people at once without pause, few receive more than superficial treatment. This is especially problematic in the hurried depiction of an adult Muslim male who faces increased scrutiny and prejudice following the attacks."

"...Under Christopher Ashley's fluid direction, the 12 versatile actors form a true ensemble cast, playing dozens of roles as both the Plane People and the plain people who welcome them to their rock. They include the gruff Gander mayor (Joel Hatch), a rookie reporter (Kendra Kassebaum), a skeptical New Yorker (Rodney Hicks), an SPCA activist (Petrina Bromley), a gay couple (Chad Kimball and Caesar Samayoa) and a middle-aged man and woman (Lee MacDougall and Sharon Wheatley) who strike up a romance; the tough-miened and supple-voiced Jenn Colella, as a veteran female pilot, has the show's only solo number. (Geno Carr, Q. Smith and Astrid Van Wieren round out the cast.) Despite minor stumbles of craft, Come From Away makes a persuasive case for the value of good intentions. For this kind of uplift you don't need planes."

"...If Company is a reminder of Sondheim's brilliance - not that we needed reminding - "Ladies Who Lunch" demonstrates yet again that LuPone is a theater concoction through and through, a treasure like Sondheim was a treasure, and she makes certain we don't leave our seats without a true feeling of gratitude for sharing, after nearly two very crummy years, this time and space her."