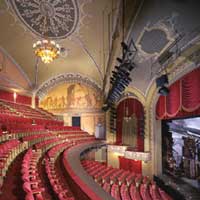 "...The musical is unlikely to supplant anyones love for the film. But in the glut of cynical screen-to-stage adaptations that have become an epidemic on Broadway in the past 20 years, at the very least its one from the heart. For anyone who spent their youth obsessing over great music and believing rock stars were, well, rock stars, Almost Famous will carry a dulcet pang of recognition. Pass the Quaaludes."

"...The show starts by acknowledging its over, as Lester Bangs (played by Rob Colletti) shouts across the stage. In the world of the musical Almost Famous, its 1973, and rock and roll is already being wrecked by commercialization and self-aggrandizement. They took the mud and the guts out of rock and roll, he proclaims like the Cicero of FM radio, though maybe Im the only one who still thinks great music will find you. Its a sentiment that felt true then, felt even more true in 2000 when the film Almost Famous came out, and now, after another two decades, feels quaint. Youre about to see something encased in layers of nostalgic amber. Rock is deader than dead, and its on Broadway  and I say this lovingly  the least cool stage of all."

"...Almost Famous is a pleasant enough two and a half hours. But there is only one truly electrifying musical number in the show, where the cast lets it all hang out and you lose yourself in the overamplified anarchy of it all (what Lester Bans might call the dumb thrill)  Fever Dog, one of the original songs written for the movie by Nancy Wilson, Peter Frampton, and of course Cameron Crowe himself. It surely says something that this number was the curtain call, each cast member belting it out like its life or death, for two seconds, just before taking their bow."

"...Writer-director Cameron Crowes Oscar-winning screenplay about a teen rock journalists coming-of-age in the 70s, Almost Famous, lands pretty much intact in Broadways latest pedestrian film-to-stage adaptation. For those who love the 2000 semi-autobiographical film, this version provides almost a complete re-enactment of the original (via a book written by Crowe), with some new songs (by Tom Kitt and Crowe) mixed with a sizable set-list of tunes from the era."

"...Cameron Crowes 2000 comedy is a quirky, coming-of-age cinematic gem, which won him an Oscar for Best Original Screenplay, and our fond memories of it  a manic-pixie-dream-girl Kate Hudson, Frances McDormand announcing My son has been kidnapped by rockstars! Tiny Dancer on the tour bus  are a persistent thorn in the stage versions side."

"...Unfortunately, the original songs  with music and lyrics by Tom Kitt as well as lyrics by Crowe, who also wrote the book  let the rest of the show down. A notable exception is "Something Real," which translates the brilliant stupidity of Russell's "be real" speech to song  leaning into the absurdity of a pampered rock star attempting to convince himself he is somehow above the pomposity of stardom by pretending to be a man of the people. It's one of the few times the show opens up to actually wink and laugh at itself."

"...The best thing about Almost Famous, the new Broadway musical based on Cameron Crowes 2000 coming-of-age film, is that it provides a good excuse to revisit the film itself, which is supremely enjoyable, heartfelt, and eminently quotable, with a first-rate soundtrack and a knockout cast, which extends from the lead performances by the likes of Billy Crudup and Frances McDormand to the cameos by future stars such as Eric Stonestreet and Rainn Wilson."

"...Warning: Do not re-watch the 2000 movie Almost Famous if you plan to see Almost Famous, the new Broadway musical. Because the movie is so good. And the stage version is so less good."

"...Anyone who doesnt like Almost Famous, the musical, on the grounds that it lacks the intellectual edge, sexual tension and anarchic fun of the movie  and there will be those people  needs to realize that there was no choice now. The world has spun forward. Other versions of this same issue are causing any number of Broadway musicals based on older movies endless levels of angst: How do you honor the older film and yet also follow todays values? You cant, and yet you must."

"...It's become too easy to decry the preponderance of screen-to-stage adaptations on Broadway in recent years. But alongside even last season's Mrs. Doubtfire (which at least had a couple memorable bits of stage choreography) and Mr. Saturday Night (in which the spectacle of Billy Crystal telling jokes was enough to transcend middling singing voices and Jason Robert Brown on autopilot), Almost Famous: The Musical hits a new low. So bereft of anything resembling care, wit, and imagination is this Tom Kitt-Cameron Crowe musical that it may end up being memorable for a different reason: as an object lesson in how not to bring a beloved movie to the stage."

"...The greatest mystery surrounding Almost Famous is how this complete mess of a musical played an out-of-town tryout at San Diegos Old Globe Theater in 2019 and still managed to secure a Broadway house."

"...This Broadway musical stage adaptation of Almost Famous, the 2000 Cameron Crowe film, follows the movies narrative almost word for word. Perhaps thats because Cameron Crowe himself wrote the book and lyrics for this stage version. As ambitious an effort as this is, adding in Tom Kitts songsmost of them sung like power-pop cover anthems from American Idol and The Voicetakes away the raffish charm and authenticity of the film and slows the story down instead of propelling it forward."

"...Rarely has rock n roll looked and sounded as boring and tedious as it does in the strange Broadway mess that is Almost Famous (Bernard B. Jacobs Theatre, booking to April 9, 2023). This is odd, as the musical is based on the popular Oscar-winning film, written and directed by Cameron Crowe, who also wrote the book and lyrics for the stage show (music and other lyrics by Tom Kitt)."

"...If we are to heed Lester Bangs earlier warning, then Almost Famous  like the music it celebrates  defies critique. It does not, however, defy comparison. It is equal parts groovy sexiness of Hair, gawky coming-of-ageness of Dear Evan Hansen and wild artist fantasy of Rent. Unfortunately, when an original musical doesnt actually have anything original to say, every note falls flat."

"...In another devastating blow to the West Coast Has Taste community, the musical Almost Famous has opened on Broadway, after a well-received premiere run in San Diego, to put another nail in that idealistic California coffin. It is a production so dull, with poor direction, ugly sets, uninteresting music, and flat performances, that it really neednt exist at all."

"...London-based director Jeremy Herrin does his utmost to pep up this musicalized revenant of the hit 2000 movie. Cameron Crowe, the original author/protagonist (its based on his own teenage quest) wrote the book and co-crafted the lyrics with composer Tom Kitt (Next to Normal). Theyve worked in a few amusing allusions to the limitations of pre-internet communications, so theres that, in terms of novelty. Kudos are also due the skilled contributors who concretize the narrative in 3D: clever, adaptable set by Derek McLane, period (1973) costumes by David Zinn, evocative lighting by Natasha Katz (that thunderstorm!), just-short-of-deafening sound by Peter Hylenski."