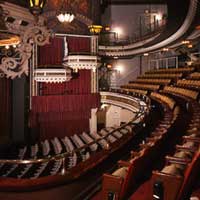 "...Bringing Aint No Mo to Broadway in the first place is even more than usual a financial gamble, but its one that underlines the nugget of hope Cooper is juggling along with his semiotic knives. At the side of the stage, as Peaches does her job at Gate 1619, theres a bag where passengers can metaphorically stow all the cultural accomplishments of Black people in America to be taken along on the flight. Dont look back at America, Peaches tells everyone boarding, lest you get turned into a privileged white guy by The Powers That Be. But also, look at that bag, Cooper says, and all that Black culture has accomplished despite those same Powers. Now that the shows leveled up to a new venue, the bags shinier than ever, and the question of its ownership all the more potent. It sits there gleaming. Who will secure it in the end?"

"...Nearly every scene threatens to spin out of control, generating unbridled momentum and almost dissolving into chaos before the plays organizing principle reins in the action. The strategy works both structurally and metaphorically, putting a finer point on the plays premise: This country is a mess and its time to get the hell out. Consistent as that throughline is, Aint No Mo is also a minefield of surprises, totally unpredictable from one minute to the next."

"...Its pitched at people who secretly like Dave Chappelle and understand the crucial importance of risk when it comes to satire but dont want to depart from their core, anti-capitalist worldview, which Chappelle always threatens to do. Which is why you dont find him on Broadway."

"...If the urge to cackle or shout is intermittent, the show and its creator are impressive. What may be most striking about Aint No Mo upon seeing it at Broadways stately Belasco Theater is how little it has changed since I first caught it Off-Off Broadway five years ago at the Fire This Time Festival, an annual showcase for early career playwrights of African and African American descent."

"...Its heartening to see a provocative play the caliber of Aint No Mo vault to Broadway so swiftly. A hit at the Public Theatre in March 2019, it probably would have arrived even sooner were it not for the Covid hiatus. Either way, author/performer Jordan E. Cooper is now, at 27, on Broadway. His accomplishment is at once formidable and, with any luck, possibly premonitory: Imagine the ongoing contributions hell be set to make, should he continue to create at this rate."