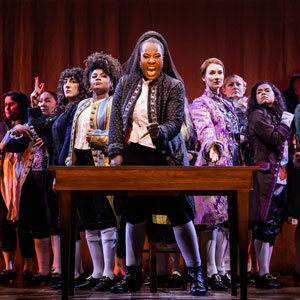 Average Rating based on 17 reviews

"...Though some will see the casting  which is diverse not just in gender but also in race and ethnicity  as a stunt and a travesty, Im in the wondrous camp. Neither the 1969 musical nor (as Hamilton has proved) history itself is so frail as to crumple under new ways of looking at our theatrical and national past. Anyway, if you prefer, you can simply ignore the fact that these fathers arent men, and focus  or try to  on the plot, which encompasses nothing less than the months of negotiations and maneuverings that led, just barely, to the Declaration of Independence."

"...Directors Jeffrey L. Page and Diane Paulus have their cast leaping on tables and hurrying across the big stage, trying to add energy to what is basically a musical about a roomful of aristocrats pontificating. They make Sherman Edwards hit-or-miss music and lyrics  he rhymes mania with Pennsylvania and predicate with Connecticut  shine as best they can."

"...In 2022, a revival of 1776 is an almost perversely hard sell. For one thing, read the room: Patriotic pride is at an all-time low around these parts. For another, Sherman Edwards and Peter Stones musical dramatization of the creation of the Declaration of Independence, acclaimed when it premiered in 1969, is now doomed to languish in the shadow of its cooler kid sister Hamilton. Whether youre a Hamilton fan, a Hamilton skeptic, or a Hamilton agnostic burned out on the whole American experiment, youd be forgiven for side-eyeing a less revolutionary Revolution musical. In this economy?"

"...The 1776 revival has a minimalist design on a muted theme of Americana; the curtain suggests faded fragments of the red, white and blue  as if shying away from overt patriotism. Yet the show retains all 13 of Sherman Edwards original, often bright and tuneful songs from the 1969 production, and also most of the sometimes goofy humor. At the same time, it makes some half dozen changes that sometimes provide a fresh perspective; most often offer a new emphasis on whats always been the strongest aspects of the musical; and only occasionally go too far."

"...Like Hamilton, this 1776 allows audience to witness a history anew through an outsiders eye, as it reframes the classic Trumbull painting in a different light, from a different angle, and offering a more critical perspective, one that inspires, yes, but one that also continues to haunt in its incompleteness."

"...By Peter Stone, its witty, suspenseful, nuanced and confronts the complex issues involved in the founding of the United States like an addictive TV drama would. 1776, as written, is not the Disneys Hall of Presidents the uninitiated imagine it to be, but an electrifyingly human, theatrical experience. Well, it should be anyway."

"...Now ensconced at the American Airlines Theater, it looks markedly different than it did more than 50 years ago  if a lot more like the actual composition of the country it's about. That's because this 1776, co-directed by Diane Paulus (Waitress, Jagged Little Pill) and choreographer Jeffrey L. Page, has replaced its founding fathers with an entirely female, trans, and nonbinary cast across a panoply of ages, abilities, and skin tones (Thomas Jefferson, for one, is visibly pregnant). Their collective presence gives the show a warmth and sweet immediacy that its bare-bones staging often lacks, and their voices lift Edwards' jaunty, tuneful score to a less bombastic, more contemplative place."

"...All things considered, it probably would have been a far better use of time, money, and talent to create a new musical about American history that reflects a contemporary viewpoint than to try revise 1776 into becoming a different musical. Take, for example, Suffs, an all-female musical recently presented at the Public Theater about the movement for womens voting rights. Or, of course, Hamilton."

"...The remarkable revival of 1776, cast entirely with female, transgender and nonbinary actors, is not as much about the pronouns as it is about a verb. Because the delightful ensemble owns the script and score of this 1969 musical as if the story of the signing of the Declaration of Independence were written explicitly about them."

"...As directed by Jeffrey L. Page and Diane Paulus, the revival of the 1969 musical 1776, which opened Thursday in a production by the Roundabout Theatre Company, is the latest entry in the current trend of blowing up the baked-in optimism of the American musical theater."

"...Once more unto the breeches, dear friends, once more! The American-history musical 1776 is not, in itself, unfamiliar: Sherman Edwards and Peter Stones tunefully educational account of the process leading up to the Declaration of Independence was a hit in 1969, and its 1972 film adaptation soon became a television staple; it has since returned in major productions on Broadway (in 1997) and in the Encores! concert series (in 2016). Yet the Roundabouts latest revival of the show doesnt feel stiff: It infuses this august body of show with a rush of fresh blood."

"...But at its best, the Roundabouts production of 1776, opening tonight at the American Airlines Theatre, shakes off any undue weight of expectation, treating the audience to classic musical theater songs sung by voices that have never before been given access. That alone makes up for any shortcomings, notably in the acting of some of the smaller roles."

"...The result feels like an MFA thesis better suited for a university black box, and not just because of the barebones design (Scott Pask's uncharacteristically cheap set is little more than a couple of sliding curtains and some old-timey tables and chairs, while Emilio Sosa's costumes are your typical stock Revolutionary War-wear), or the fact that the actors get into costume on stage while staring us down. The sound designer Jonathan Deans blasts the hell out of our eardrums, often making the lyrics all but incomprehensible, and semi-distorting the inventive new rock orchestrations by John Clancy."

"...The biggest disappointment comes in the end. The ending usually is one of the most dramatic moments in musical history that sends shivers down the spine. As originally conceived, you hear each delegate being called by name to sign the document and take their place in the designated spot as in the Trumbull portrait in full regalia. With each name signing, you hear the Liberty Bell clanging, with each name the music builds and the clanging gets louder until the tableau is completed. You get to see the entire portrait that is frozen in time and the music swells to a full crescendo."

"...1776 is at its best as a fascinating history lesson, and at its most dragging when the mostly-not-all unmemorable songs take us away from that."

"...What the script lacks in nuance, directors Jeffrey L. Page and Diane Paulus blanket in spectacle. Damn if these Patriots and Loyalists dont look good! Emilio Sosas costumes artfully meld the past and present like a Kehinde Wiley painting. Where I expected to find ashen waistcoats and breeches, I found leather pants and gold hoops  not unlike the ones I wore to the theater. Tonal and compositional liberties have also been taken from Edwards original score: soul, jazz, rock and even gospel notes have been added. That said, all of the artists here are confident masters of their voices."

"...1776, winner of the 1969 Best Musical Tony Award, has returned to Broadway in what might be termed a revival with a difference. It has become common for new productions of old musicalsespecially infrequently-revived old musicals with long-deceased authorsto be offered with alterations in tone, material, and sometimes intent. This is often done under the assumption that most viewers wont know the difference. Not so in the case of this 1776, which has been directed by Jeffrey L. Page and Diane Paulus, and imported by the Roundabout from Pauluss American Repertory Theatre in Cambridge. We are told and specifically requested to keep in mind thatand I quotethe cast includes multiple representations of race, ethnicity, and gender; they identify as female, transgender and nonbinary."